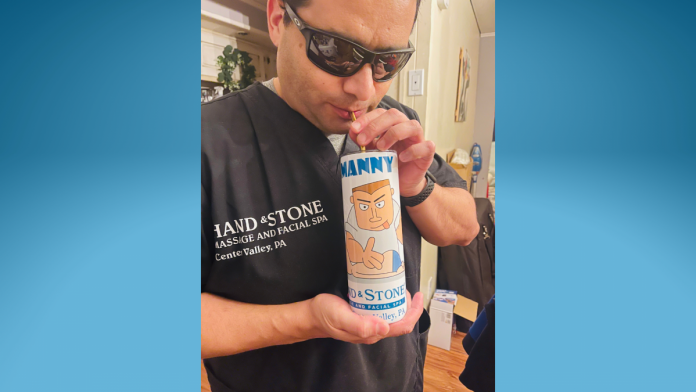 Northampton Community College (NCC) massage therapy program graduate, Hector Hernandez, known as Manny to his inner circle, grew up in Puerto Rico. He was born with scars on his retina, which made him visually impaired, but when he turned 18 years-old, his life changed. His scars started pulling on the retina and left him fully blind. He travelled to Pennsylvania to have emergency surgery, and over the course of 2-3 years, had a total of seven surgeries to no avail. Throughout that time, he lived with his aunt in Bethlehem, and she would bring him back and forth to Philadelphia to have check-ups and surgeries. “At one point, because of the pressure changes in my eyes, she was taking me every day. I’m so appreciative for what she did for me,” says Hernandez.

Eventually, the tides changed for Hernandez. He had a walkie talkie where he’d try to communicate with people when he couldn’t do much post-surgery. “I’d listen and call down, hoping someone would pick up the signal and talk with me.” One day, some neighbors started talking with him on one of the channels, and they made plans to meet. That’s when he met his now wife, and they built a family together.

Hernandez’s wife encouraged him to go to school for massage therapy telling him he had capable hands to massage. He said, “As a blind person, my sense of touch is more developed than others.” So, he decided why not use these powers to heal others.

In his time at the College, Hernandez has learned to advocate for himself and be resilient. As a visually impaired student, he had a challenging time when he first began his studies.

“Because I was the first blind student in the program, we were all learning together on how to best serve someone like me. I knew what I wanted, I just needed assistance getting there. The professors were very supportive and encouraging. They helped me with everything that I asked for and had a positive attitude. I will forever be thankful to them.”

With his wife’s full-time work schedule, Hernandez has been his children’s main caregiver. Hybrid class schedules allowed him the flexibility to concentrate on his home life while earning his degree.

Hernandez has now started work at Hand and Stone as a massage therapist, which was one of his goals. Long-term, he would like to come back to NCC to teach. “I want to gain experience to teach others and go back to NCC to share my knowledge. On my last day of class, I told my professor that I’d see her in three years, the amount of experience you need to teach in the program at the College.”

His one piece of advice to fellow students is, “you will come across obstacles, but keep working towards your final goal. When it gets harder, push harder!”