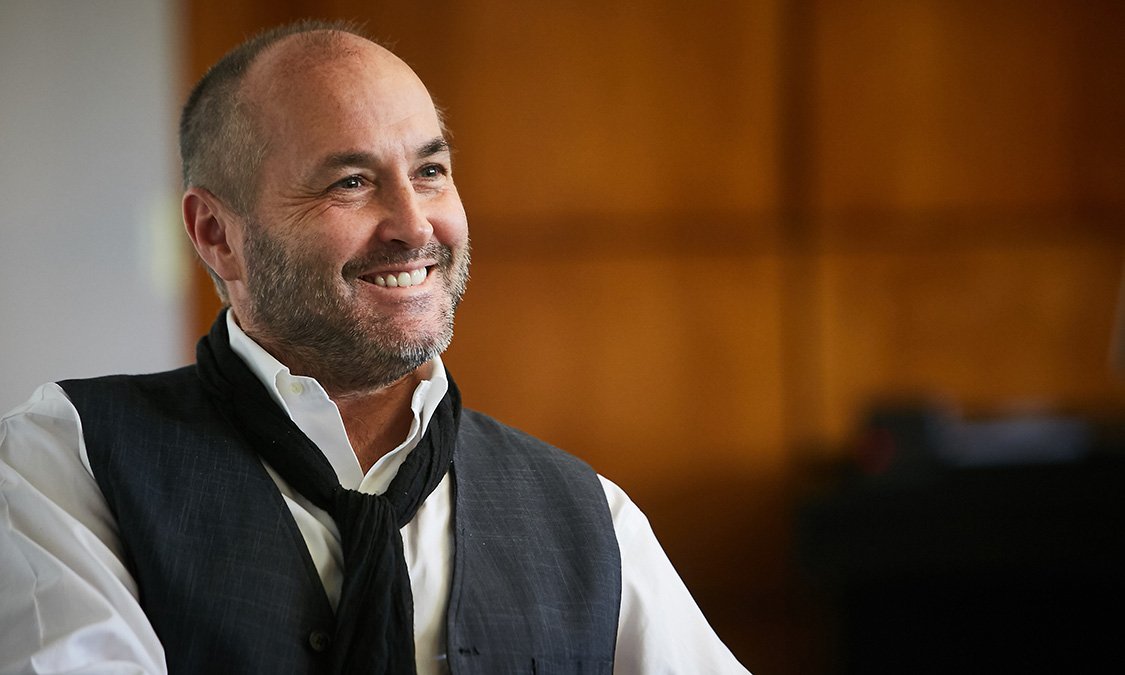 “I’m here to propose that the good life is not your own. It embraces the life of others.”

Award-winning Irish-American author Colum McCann tackled the subject, What Constitutes the Good Life, in April 2016 in the Spartan Center gymnasium at Northampton Community College. “A wise friend of mine once said, ‘A long life isn’t good enough, but a good life is long enough,’” McCann told an audience — estimated at more than 400 students and members of the public — who attended his free lecture.

McCann and his audience shared many of those during his talk. “Talking about having a laugh, I’m Irish,” he said. “And, as you all know, we’re never happy until we’re sad. “We’re the happiest sad people in the world.” At one point, he warned the audience: “Don’t get me singing. My standard joke is I do sing, but I can’t.”

McCann was good friends with fellow Irish-American writer Frank McCourt, who died in 2009. In a hospice immediately after McCourt died, his widow, Ellen, told McCann: “Come here, I have to tell you something.” McCann thought she wanted to share some great death bed revelation by McCourt, perhaps something about God or literature. “She beckons me over, she puts her arm around me and she says, ‘Your fly is open.’”

McCann probably got the biggest laugh of the night when a man in the audience asked a serious question about why more than 90 percent of people from Ireland came from rural backgrounds but settled in American cities such as New York, Boston and Chicago. Before giving him a serious answer, McCann replied:, “That’s where all the good pubs were.”

Born and raised in Dublin, the 51-year-old McCann is the author of six novels and three collections of stories, most recently “Thirteen Ways of Looking.” His works have been published in more than 35 languages and have won numerous awards around the world, including the National Book Award.

His advice for an aspiring young writer was “if you have the philosophy that the only things worth telling are the things that might possibly break your heart, you will tell a good story. Just try to break people’s hearts.” He told of living for more than a year among thousands of homeless people in the subway tunnels of New York as a reporter and, earlier in his life, of spending a year and a half riding a bicycle across the United States.

“Thirty years ago, I came through Easton and these parts on a bicycle,” he told the audience. “I met spectacular generosity. I met a couple in Easton who owned a bike shop. Nobody here would recognize me. I was 21 years old, I had hair — and a big old scruffy beard.” McCann said he often lived on canned ravioli and ramen noodles “at 25 cents a package. I couldn’t believe it. I recently saw they’re still 25 cents a package!” He said he slept out most nights during that journey, one of the exceptions being “when I fell in love — briefly sometimes.”

“I discovered a way to listen. And I discovered, most of all, the privilege of listening. It was the beginning of what I hope will continue to be a good life.”

It was while meeting “all sorts of extraordinary people” during his bicycling adventures that he began to develop the notion of “the democracy of story-telling.” He said everyone has a story and a need to tell their story. “But the true democracy is we all also have a need to listen to the stories of others. This to me is the great dignity: the ability to listen. We want to be recognized by others. We want to be valuable. We want our story to be valuable.” He said people feel privileged when someone just listens to them. “I discovered a way to listen. And I discovered, most of all, the privilege of listening. It was the beginning of what I hope will continue to be a good life.”

The ability to push people into understanding what it means to the other is one of the most extraordinary, powerful human characteristics that we have. Isn’t that a wonderful thing, that we don’t have to only just think about ourselves? But I’m also here to propose to you that empathy is not enough. Understanding is not enough. What we have to do is learn how to turn that empathy into action. That’s how the good life occurs.”

He later offered more explanations for that phrase, including saying, “The good life occurs not in the accumulation of things, but in opposition to diffculty. It occurs in the face of the darkness and the  torment. Embrace diffculty. That’s the thing. That is the good life.” He acknowledged cynics have told him, “You’re just a sentimental old shite.”

“But I am as tough as any cynic,” said McCann. “I see it just as dark as they do it. I will go toe to toe with any cynic and match her or his cynicism any hour of the day. And then I’ll say, ‘But so what?’ Big deal. No great revelation. The world’s dark. We’re nasty, we’re evil. You have to go beyond that.” He said some cynics “are cursed by their own rigidity. They are limited by the notion that human nature itself is limited and that goodness cannot occur. They don’t see the good.”

He said he’s been traveling to the Middle East, adding, “Lord knows why. Talk about embracing difficulty.” He said he wants to tell “a rattling good story” about that troubled region of the world, adding: “I still haven’t figured out what it’s going to be. As a writer, I like to be a bit of an explorer and not be a tourist. I don’t know where I’m going or how I’m going to get there, but I’m going to get there eventually. The best writers are cast out to sea and they’re completely lost. But eventually we find land. So wish me luck.”

McCann teaches creative writing at Hunter College in New York City, where he lives with his wife and three children. He is the cofounder of Narrative 4, a nonprofit global story exchange organization between young people from different parts of the world. “They tell each other stories,” he said, adding exchanging those stories helps them break down barriers almost immediately.

McCann’s appearance was the culmination of the college’s yearlong exploration of what constitutes “the good life.” He spent the day on campus before Thursday night’s lecture.

“There’s a great Irish phrase that says, ‘You’re in your grammys,’” he told the audience at the start of his talk. “What that means is you feel at home, like you’re in your grammy’s house. I feel like I’m in my grammy’s today — with the cherry cake and everything like that.” Praising the college, he said, “It seems to me that you are speaking toward everything I want education to be. It was really quite incredible to see the light in some of the students’ eyes today. I go to a lot of colleges, and you don’t always get that. Today was a group of non-entitled, brilliant young people who were investigating the way in which they might eventually live the good life.”

A Story to Die For