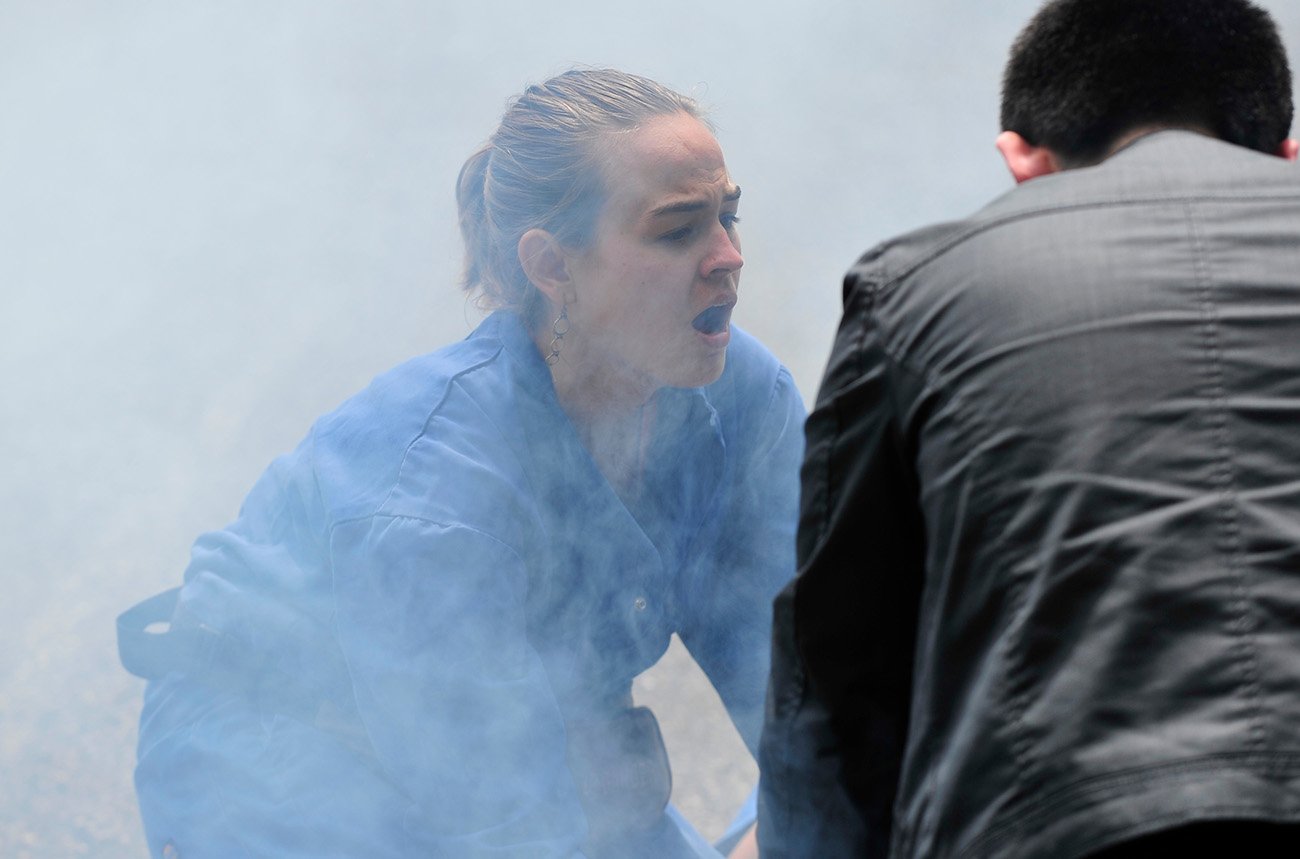 Journalists from around the world made their way to the Lehigh Valley to participate in the Hostile Environments and Emergency First Aid Training for Journalists — a course offered through Northampton Community College, sponsored by the New York Times and Pulitzer Center for Crisis Reporting.

Nineteen-year-old Osama Jumaa was a photojournalist for the British news agency Images Live when she was killed covering a rescue operation in Aleppo. She was one of more than 70 other journalists who died in action last year. Nearly three-quarters were victims of “deliberate, targeted violence,” Reporters Without Borders said.

With violence against journalists on the rise and becoming increasingly deliberate, the need to train members of the news media how to respond to hostage situations or hostile circumstances has never been greater.

That’s why 16 journalists from around the world made their way to the Lehigh Valley to participate in the Hostile Environments and Emergency First Aid Training for Journalists — a course offered through Northampton Community College at Hellertown Sportsman’s Association, sponsored by the New York Times and the Pulitzer Center for Crisis Reporting.

“We started doing the hostile environment training two years ago,” said Christopher Post, NCC program manager for Emergency Management. “We partnered with a network that does specialized training to provide an opportunity to have these courses in North America. We wanted to provide instructional support to train journalists from all over the world.”

The course is taught by former members of the British military with Post and program manager of Emergency Medical Services John Evans to prepare journalists for hostage situations while also teaching first aid and self-defense. Simulations used fake blood, costumes and special effects such as black powder to mimic the sounds of landmines and gunfire.

“The reality is that some of the students that are here, within a matter of days, will find themselves in a frontline location around the world where they could potentially come in contact with a hostile environment or critical situation,” Post said.

“By educating these journalists, they’re going to potentially, by next week, apply these skills to save somebody’s life,” he said. “In the grand scheme of things, we have so many countries represented here. When you take a step back and realize that the 16 people that are here could truly make a difference, maybe not necessarily in the community of the Lehigh Valley, but in the global community.”

“The reality is that some of the students that are here, within a matter of days, will find themselves in a frontline location around the world where they could potentially come in contact with a hostile environment or critical situation.”

In one situation, program participants found themselves surrounded by several would-be terrorists dressed in blue jumpsuits, with bags over their heads. A voice of a man thundered to them, “Get on the ground.”

One tore the bag from his head and sprinted away as gunfire echoed through the woods. In another scenario, journalists were sent into the woods for an interview where they stepped directly into a simulated mine field. Minnesota journalist Alex Potter was prepared for this with her nursing background.

“For me, I like to feel practically useful. That’s why I like nursing,” said Potter, who was preparing to go back to the Middle East. “You get to experience intense situations and it’s nice to be needed. You will always have a job as a nurse, so it’s good to have another skill.”

For the Indian-administered Kashmir native Aliya Bashir, this was the second time she took the course, which focused more this time on first aid than on cyber security.

“We had the journalistic approach and thought, ‘We have to get the story done,’ right? We didn’t see the danger,” Bashir said.

“Now, it will not just be the story. It will my safety and the safety of my colleagues,” she said. “I will think about insurance and at the end of the day ask if the story is worth it. As a freelancer, you’re all on your own. You don’t have security, you don’t have insurance, you have to make those tough decisions if you’re going to do the story and [ask yourself] what are the risks? If you are safe, you can be helpful to others.”

“If we are caught up in a [threatening] position, we at least have the basic skills to get out of that,” Bashir said. “It’s not fighting. We’re not going to chase down people. But at least we know how to find that escape route and how to think in advance to minimize the risks.”

Dedicated to all the people who make it work, no matter what.