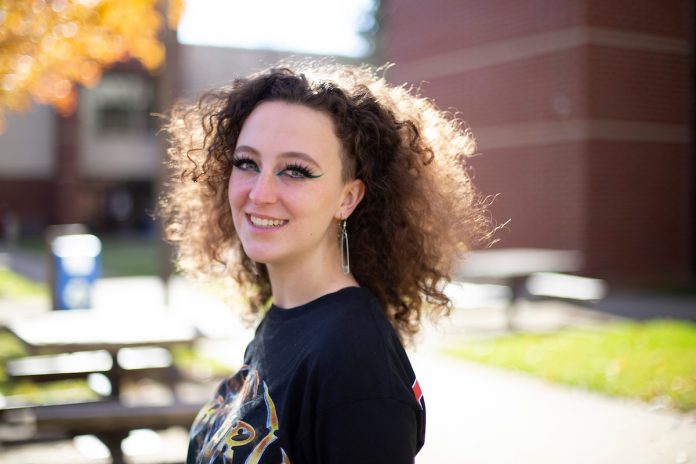 The fictional archaeologist Evelyn Carnahan sparked spring graduate, Rebecca Ashdot’s, love of unearthing history. Watching the character read hieroglyphs in the 1999 Stephen Sommers movie The Mummy captivated then ten-year-old Ashdot so much that she discovered a passion to become an archaeologist.

Her impoverished mother emigrated from Kazakhstan without knowing English and her determination and fierceness in advocating for Ashdot’s non-verbal autistic brother inspired Ashdot to be ambitious and stay motivated in her journey.

Ashdot majored in general studies at the Monroe campus. She received the ESSA Bank and Trust Foundation Annual Scholarship. Ashdot has served as president of the Beta Beta Chi chapter of the Phi Theta Kappa (PTK) Honor Society and earned a PTK scholarship to study at a Pennsylvania State System of Higher Education college after NCC. She intends to earn a master’s degree.

Ashdot, who is gender fluid, belongs to the NCC Pride Club, the Science Club and the National Society of Leadership and Success.

When she’s not volunteering as an archaeologist for the National Park Service in the Delaware Water Gap, Ashdot is helping to excavate the site of the 19th century Kittatinny Hotel. Through volunteering, she met her role model, 84-year-old amateur archaeologist Don Kline, who excavated the Shawnee-Minisink Archaeological Site in East Stroudsburg in the 1970s. The site contains evidence of Native American life dating back 13,000 years, according to the Monroe County Historical Association.

“Rebecca is detailed, conscientious, and hardworking, all important qualities for an archaeologist working in the field,” wrote Andria Zaia, Ashdot’s anthropology professor.