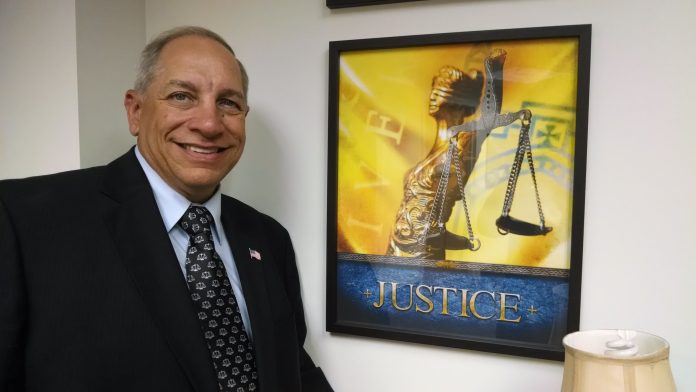 Majoring in psychology has given Northampton Community College (NCC) winter graduate, Paul Menditto, insight into the defendants whose cases he rules on as a magisterial district judge in Pike County. Menditto, who has been a judge for eight years, uses his background in psychology to encourage the truant and violent students whose cases he hears. He urges them to avoid fighting over social media posts, to steer clear of abusive partners, and to prepare for the future by prioritizing education.

Menditto started as a criminal justice major before switching to psychology. He belonged to the National Society of Leadership and Success, the NCC Psychology Club, and Phi Theta Kappa.

In Menditto’s free time, he umpires baseball and softball games for children and adults. He also plays oldies from decades past on acoustic guitar at open mics. He has acted in many community theater productions. The first of his roles was a singing part in “Oliver.”

Menditto is currently majoring in psychology at East Stroudsburg University, where he studies part-time, in addition to working full-time as a judge.

NCC faculty appreciate Menditto’s commitment to his chosen field and his contributions to class discussions.

“Paul is interested in learning about psychology, and he challenges himself to comprehend new things.  He’s willing to ask questions, use critical thinking skills to analyze information, and see things from a different perspective.  He enjoys sharing his experiences so others can learn from him as well. He collaborates well with others and likes to be helpful,” wrote NCC’s Dr. Karin Donohue, Menditto’s psychology professor.

Pursuing Dreams for Himself and Others