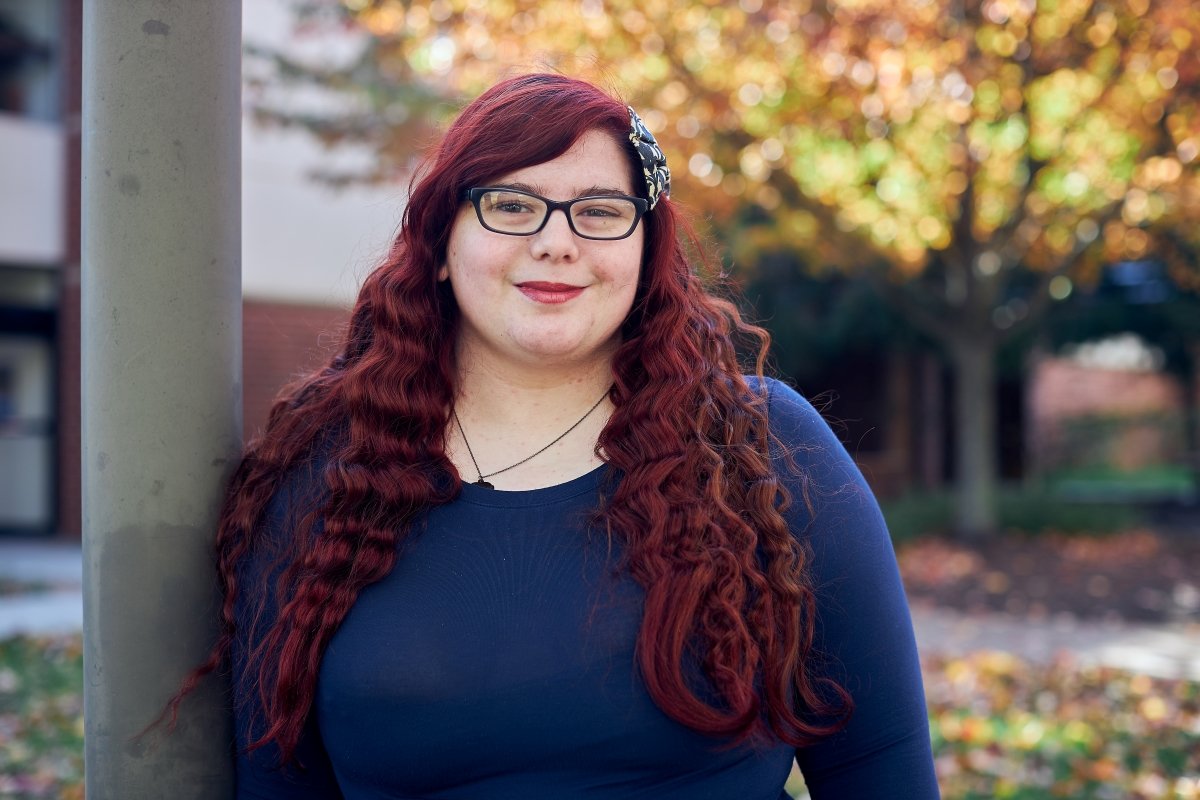 “Ever since I can remember, my mother talked about how much she loved going to Northampton Community College,” says Liberal Arts/English major and Hellertown resident Kaitlyn McCormick.  “I always wanted to go to Northampton because of my mother’s positive experiences at the College.”

In addition to knowing where she wanted to attend college, she also knows what she ultimately wants to do: be a screenwriter for the BBC (British Broadcasting Network), although she will look at smaller broadcasters, too.  As soon as she graduates from NCC, and when it is safe to do so, she looks forward to moving to London. Once there, if she thinks she needs to, she will apply to universities in London.

Why the BBC?  When she was in seventh grade, she fell in love with the show Dr. Who.  “The writing spoke to me,” McCormick says.  She started playing around with plot lines for the show and shared them with friends and online.  People started to tell her that she wrote the characters very realistically and that she had captured their hearts and minds. Since then, she has been determined to write for the BBC, especially science fiction and mystery.

Moreover, since middle school, McCormick has had a fascination with London, stemming from a solo trip she took traveling around England, staying with her mother’s best friend’s family.

“It was amazing just to have my freedom and experience what my life could be out there,” she says.  “That trip just cemented it in my mind that I wanted to live there as soon as I could. It is so beautiful!”

Wherever she is, writing is of utmost importance to McCormick.  Mostly poetry-and play-based at present, her work is published and available on Amazon, including three books of poetry.  She is now busy writing a poetry book with an author friend that focuses on being LGBTQ+ and the perseverance both co-authors have had in persevering through that experience. She is also writing some one-act plays.  She envisions writing televisions shows that are all-inclusive, realistic, and with stories that help people see themselves on TV.

As a writer, McCormick remembers a valuable lesson she learned from an NCC professor.

“Basically, he told me that writers cannot help but write.  It is almost like an impulse.  If someone is considering becoming a writer and can start and stop as they please, they shouldn’t be one.  Every day, I need to let out my thoughts through writing.  Writing is my life essentially.  That is me,” she says.

McCormick values the writing program at NCC.  She appreciates its uniqueness in that there is no strictly English major, which means that students get to take classes that English majors at other colleges would not take, such as psychology, philosophy and forensic science.

“I get to experience all these cool things and learn about so many interesting subjects,” she says.  She adds that those needing a writing-intensive course are not limited to writing classes; an example is the psychology course she chose.

In conclusion, McCormick feels pleased that she followed her mother’s footsteps to NCC.  She relishes having helpful professors and resources and the chance to make lasting friends.  Her advice for incoming students?  “Don’t be afraid to take classes that may seem daunting, because the few courses I thought would be very difficult ended up being very easy, as long as I did the work.”

She is also grateful for the Grimes Family Endowed Scholarship she received: “It has helped me tremendously.  It is such an honor, and I am able to finish my degree with the help of this scholarship.

And The Winner Is…