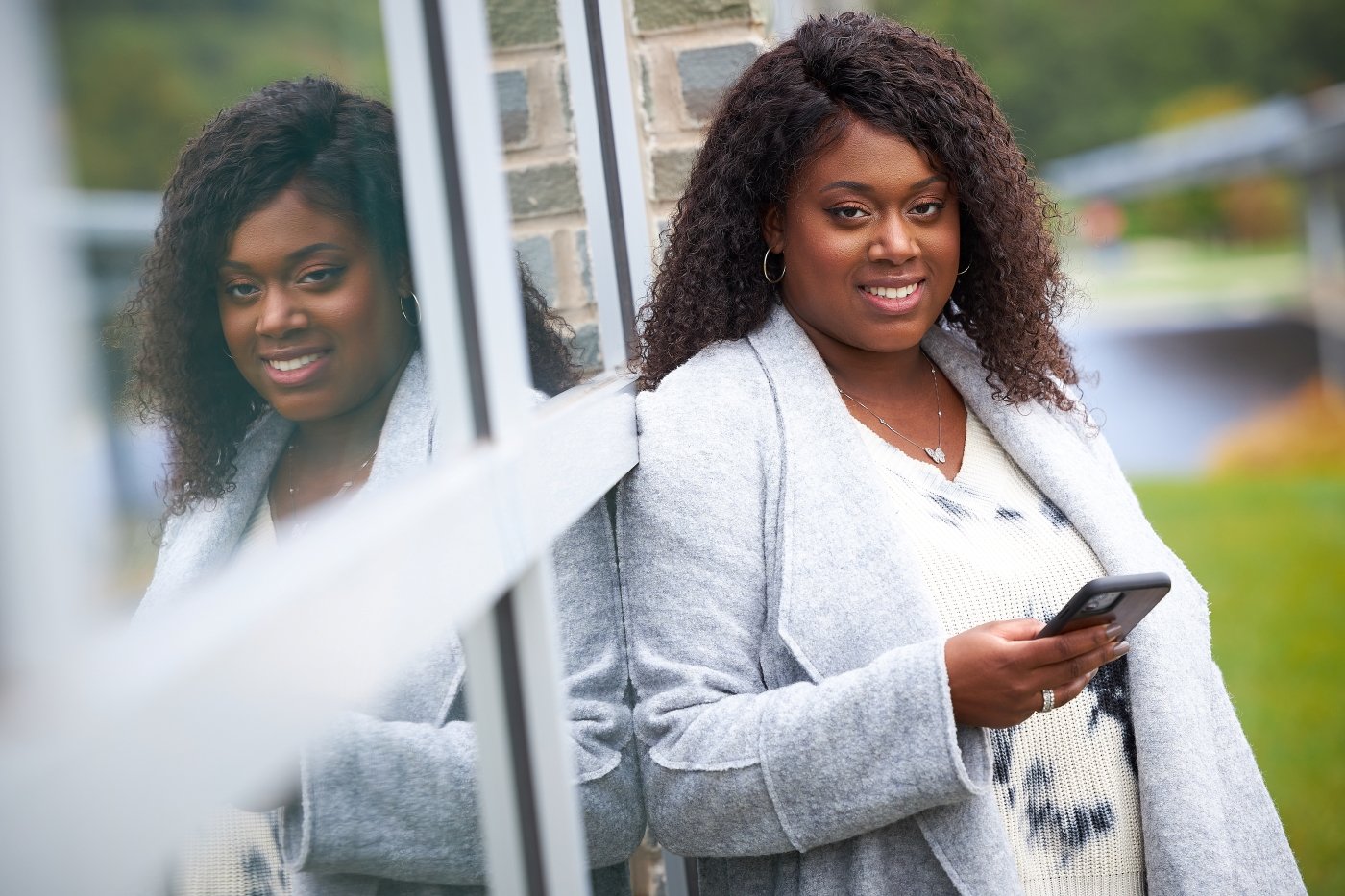 Since earning her GED at Northampton Community College (NCC), life has opened up in many ways Rebecca James never expected.  James is a resident of Effort and a general studies major at the Monroe Campus who will graduate next spring.

After her GED, it just seemed natural for James to continue her education at NCC.  Soon she found herself captivated by Professor John Tindell’s course on mass media and society.

“Learning about the different ways communication grew over time and being able to connect with people from different walks of life just fascinates me,” she says.

James says that she has parents who are supportive of her education and cheer her on.  Nevertheless, her life at home has not always been easy. Since her father works in New York as a chauffeur  and stays there to be near his job most of the week, James has assumed much of the responsibility for taking care of her mother, a retired nurse who has fibromyalgia and doesn’t drive, and her grandmother, who has dementia.  Most of the time, James is driving her mother and grandmother to doctor visits or grocery shopping, leaving only the evening for her studies.  Having to do her schoolwork at night leaves her exhausted, she says.  In addition, losing three aunts to breast cancer within three years left a great impact on her outlook on life—a feeling of urgency about time.  Consequently, she is mindful of every moment and grateful for every opportunity.

Two older brothers complete James’ immediate family.  Jason, who is 16 years older than she, is in the Air Force in Alaska. It was he who encouraged her to complete her GED.  Her other brother is 13 years older and lives in Australia.

With all the responsibilities James has for her family and college, she has made time for leadership roles in the honor society Phi Theta Kappa, as public relations liaison and secretary and a member of the photography club.

In Phi Theta Kappa, she learned to work in groups, made lasting friendships, and gave back to the community.  Through the Photography Club, she has increased her skills and even had some of her photos exhibited in Keystone Hall. Additionally, she is an intern with NCC’s Marketing & Communications Department.

Both her studies and student club experiences have furthered James’s personal growth: “I have become more open with classmates and professors, have come out of my shell, and am better able to talk my ideas out, and open my mind to new possibilities,” she says.

She has many interests.  Her hobbies include hiking, singing and travel.  She has visited England and Italy and hopes next to go to Australia.  James is also very passionate about women’s rights, the Black Lives Matter movement and mental health.

A recipient of the Harold and Marcia Wagner Scholarship, she says that “I feel truly honored.  The scholarship has definitely helped me financially to continue my education at Northampton.”

After graduating from NCC, James is looking into colleges such as Columbia and Howard universities.

“With everything that has happened, I am thankful for the experiences that have shaped me into who I am now,” she says.