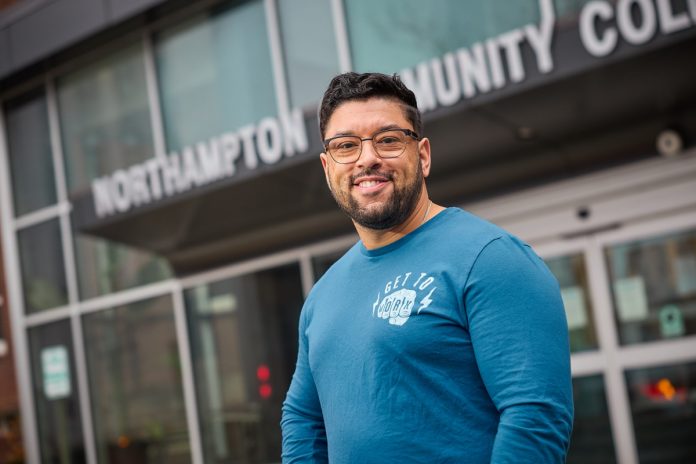 “The only person that can stop you is yourself,” explains Northampton Community College (NCC) student Eric Falcon.

Throughout his childhood, Falcon never found himself getting into trouble. That all changed during high school when he started to focus more on fitting in than on his schoolwork.

Falcon grew up in a rough neighborhood in Plainfield, New Jersey and lived in poverty with his mother and younger sister. He began making friends with people who discouraged him from trying to further his education and led him down a path to poor decisions. He eventually dropped out of high school and fell into substance abuse.

Years later, in 2017, Falcon moved to Pennsylvania with the hope of starting a new chapter in his life where many other stories would have ended. With the help of his friend, he joined the Laborers’ International Union of North America at the age of 31 as an apprentice working alongside others in the construction field.

A passion for construction management stemmed from his Uncle Francisco, who owned a construction business and who Eric looked up to as a father figure. “I grew up watching my uncle, an honest hard-working man who provided for his family and pushed himself to be better every day. I wanted that.”

Two years after joining the Union, Falcon found motivational speaker Eric Thomas, who inspired him to find his inner purpose and guidance through religion. He checked himself into a rehabilitation center and later would join the Collegiate Recovery Program, at NCC, which would further help him on his journey to better himself.

While Falcon was surrounded by positive like-minded people in recovery, he had an epiphany about going back to school to complete his high school degree. “I always believed that I would never be able to finish school until I was in recovery and started developing new friends who encouraged me.”

Falcon came to NCC’s Fowler Family Southside Center to pursue his G.E.D. in 2018. He went into the program with determination and perseverance. After completing this program, he started in the construction management program at the College with the goal of advancing his career in the Union.

Falcon thinks that everyone needs a “why” in life, a reason for living. Through his experiences, he found that his “why” is helping other people and giving back. Falcon finished his apprenticeship program in the Union after only three years, and a few years later he was given the opportunity to become an instructor at two of the Union’s training centers. Eric describes this moment as one of his greatest accomplishments. “It has given me the opportunity to connect with people who may not have anyone to connect with about similar struggles. I want to pay forward the advice, support, and knowledge that I have received over the years from my peers in recovery and the Union.”

Falcon credits his girlfriend and all of the good people who have touched his life for shaping him into the person he is. As he continues his journey to better himself, he uses hobbies like CrossFit that push him to become stronger both physically and mentally.

“Everything I went through I would never change because it helped me become the person I am today. It gave me character, personality, strength, and courage. It all has shown me that it doesn’t matter what I go through in life, I can get through anything.”

Falcon is proudly 6 years sober and expecting his first child. He continues to attend NCC with plans to work his way up to director for the Union’s training center.