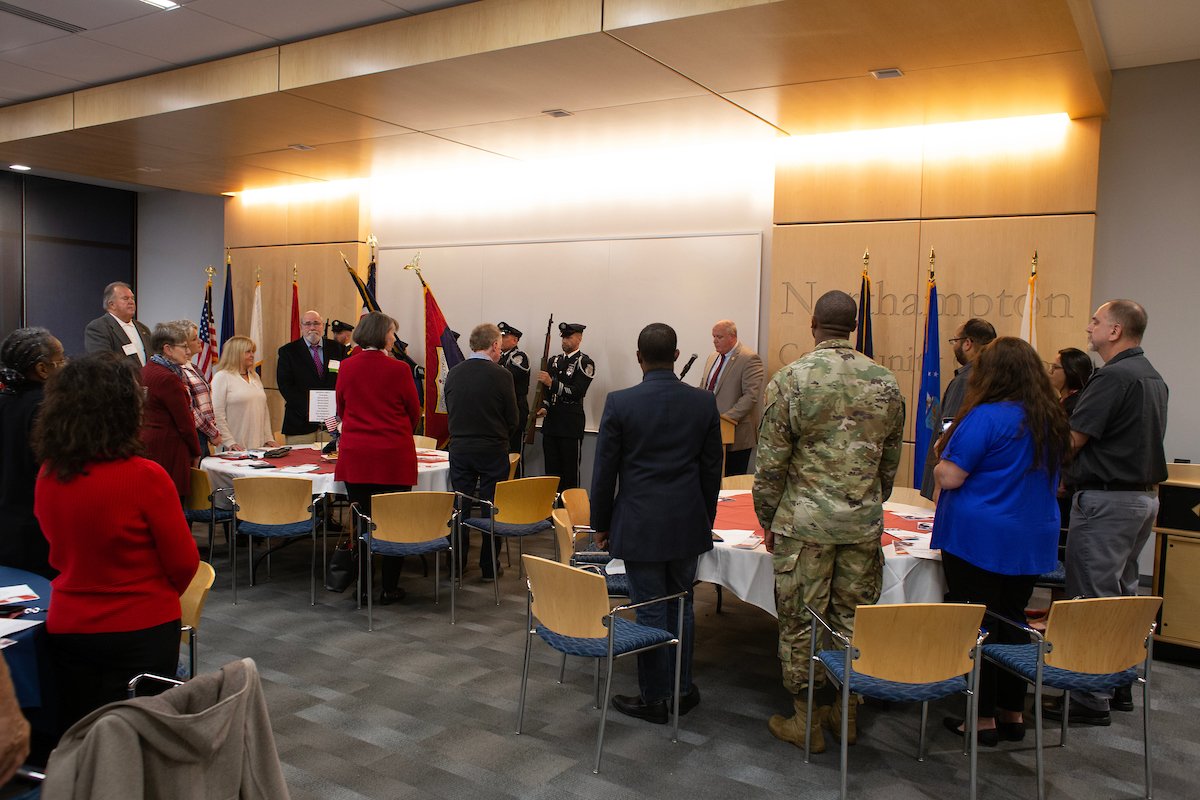 “Veterans Day is a special day at the College and throughout our nation, a time when we pause to remember and honor the dedicated men and women who serve and have served in the United States armed forces,” said President of Northampton Community College (NCC) David A. Ruth in opening remarks at a Veterans Day Celebration this November 11 at the Bethlehem campus.

NCC’s Adult & Military-Affiliated Student Services Office and the Alumni Association invited alumni, current students, and community members who are currently serving or who have served in the military to join in an event held to honor their dedication to our country.

“It is because of them, and their sacrifices, that we enjoy the freedoms that we as Americans have enjoyed for over 245 years and hold so dear to this very day,” Dr. Ruth commented.

The President asked everyone to observe two minutes of silence as is customary to reflect on the 11th hour, of the 11th day, on the 11th month of 1918 when WWI ended. On this date in history, faced with a lack of resources and close to invasion, Germany signed an armistice agreement with the Allies.

Guests stood as Northampton County Department of Corrections Honor Guard rendered military honors to the esteemed guests. While everyone was standing at attention, Veteran, NCC staff member, and Band of Brothers Advisor, David Repyneck, led the room in the Pledge of Allegiance. Patti Hughes-Lutz, a local singer, filled the room with emotion during her passionate rendition of the National Anthem and God Bless America followed by a moving Bag Pipe Performance by John Bottomley.

Following the performers, NCC unveiled the newest effort to better serve the unique needs and circumstances of the military-affiliated individuals at the College. The Veterans Resource Center, located in College Center 108 on Bethlehem campus, is a space of security and camaraderie with a lounge, group study area, quiet study space, and a computer lab.

Before the attendees sat down to lunch, Dennis Feeley, veteran and NCC alum, spoke to the audience about his experience as a vet coming home from a war where he was greeted by angry protesters after he said, “I had just spent four years doing what I thought was the right thing to do.” He came to NCC and found a “brotherhood of hundreds of other veterans,” with whom he started a veterans club. The Band of Brothers (BOB) still stands as a student-run organization that advocates and supports student veterans on campus. The goal of the group is to facilitate a seamless transition from military life into higher education and build a foundation for the future.

That comradery students feel in the Band of Brothers on campus can be seen everywhere in the community. As a veteran wearing his uniform or any other symbol of his service, Dennis gets stopped often and thanked, something that never ceases to touch him. Other vets stop to talk about their experience, and bonding with strangers is a big part of what makes him so proud to have served.

The event concluded with Mike Sparrow, former NCC staff member and Veteran, offering his own personal antidotes on his time serving, and he stressed the importance of a veteran-friendly institution like NCC.

The College will continue to honor and serve our military-affiliated students with great pride each day. Find information on our resources and more here.