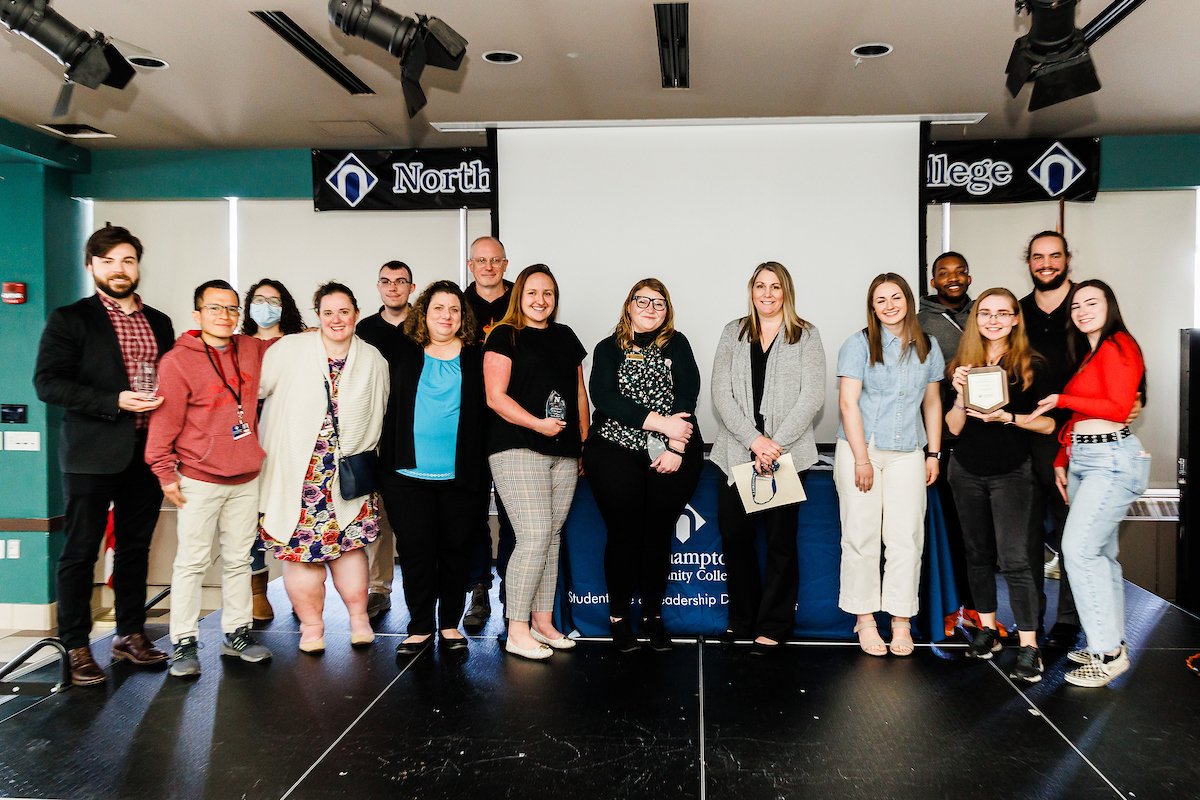 For the first time in over two years, the Student Leadership Awards were held in-person at both the Bethlehem and Monroe campuses to celebrate rising student leaders and those that have helped bring the energy and excitement of student life back to campus.

The ceremonies began by recognizing students for awards they have received this semester from agencies outside of campus including the Addy Awards, the Keystone Media Awards and Phi Theta Kappa honors before moving onto the Student Life & Leadership accolades being presented.

This year, there were two winners in both the Club Officer of the Year and Club Advisor of the year category on the Bethlehem campus. NCC Monroe also had a tie in the Club of the Year category. In response to the dual winners, NCC’s Director of Student Life & Leadership Development, Doug Smith, noted, “We have been in unprecedented times and sometimes that calls for an unprecedented response. When there is more than one worthy candidate that have both gone above and beyond you make the smart choice. The committee decided to present this award to two students this year.”

The Monroe Campus also introduced a new award in honor of the late dean, Dr. Matt Connell. The Dean Matt Connell Student Leadership Award was created to highlight an NCC Monroe student who exemplifies strong leadership qualities including a strong work ethic in their on-campus job, academic excellence and dedicated membership in at least one campus organization.

Club Officer(s) of the Year

Club(s) of the Year

Club Advisor(s) of the Year

The PRISM award is given out yearly to an NCC student or organization who is a champion for creating a diverse and inclusive community throughout NCC’s campuses.

A recipient of this award should be a leader on campus who has overcome obstacles in their life and had grown in their time here on campus.

This award is presented in honor of Dean Matt Connell to an NCC Monroe student who exemplifies strong leadership qualities including a strong work ethic in their on-campus job, academic excellence, and dedicated membership in at least one campus organization where they have demonstrated tremendous leadership.

The Irvine Freshman Leadership Award is chosen by the College Life Committee, and is given to a full-time freshmen who participated in student activities and/or student government in their first year at Northampton Community College. This award is made possible by Ken Irvine, a former faculty member, who made funding available through a generous donation to the college.

The Silent Impact Award is presented to a student who has been involved in a variety of activities but not necessarily held formal leadership position.

Community Education Award for the Center for College and Career Readiness

Congratulations to all the winners!