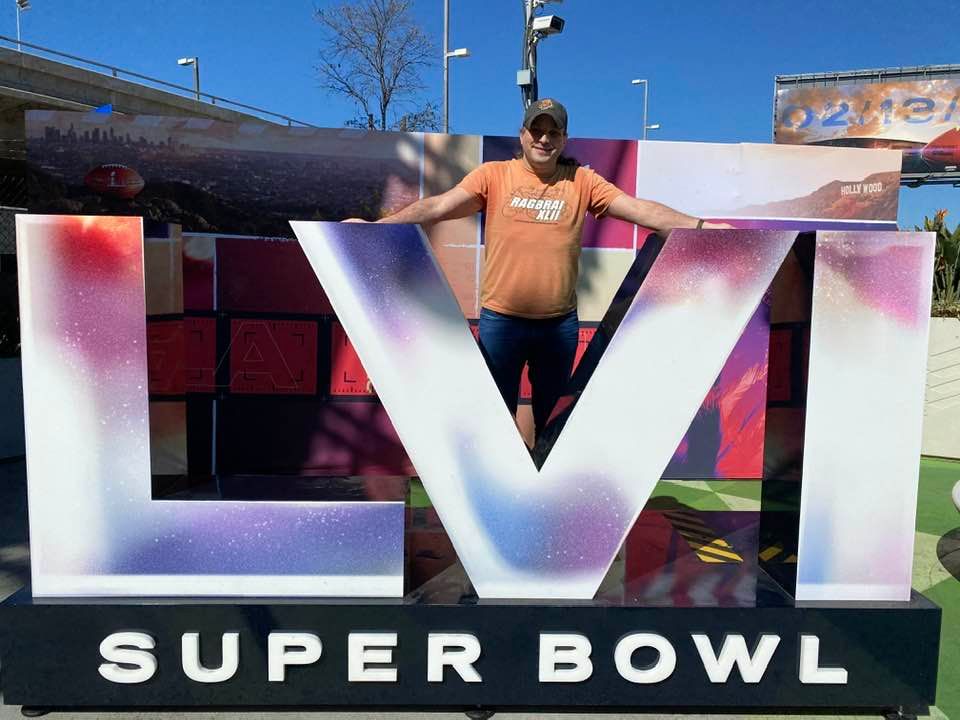 Section 543, Row 20, Seat 20, the 3rd row from the top of the stadium. To Northampton Community College (NCC) Monroe Campus English Professor, Dr. Erik Grayson, that was the best seat in the house.

Grayson got the chance to live out a dream come true. A Bengals fan since he was seven years old, he made it known every time he wore his lucky Bengals hat around campus what team he was rooting for each season. Knowing how important his team is to him, many of his peers, students and co-workers decided to pitch in and create a GoFundMe page in an attempt to send Grayson to the Super Bowl this year. It was a big deal seeing as the Bengals haven’t made it to the Super Bowl in 33 years.

When Grayson heard about the effort, he was both honored and slightly embarrassed. “I like to think I’m special, but there are so many people who are special and deserving of such kindness. This has all been so surreal. The best part for me was having people cheer for you and be interested in this and get their own joy and happiness out of following the journey. That was the most powerful and emotional part.”

Students comment on how much they’ve learned from Dr. Grayson and how he inspired them. “When I first took classes in college, I didn’t care about academics in the slightest. I received my first paper back in Dr. Grayson’s English class, and my grade wasn’t great, which I was totally used to at this point. The difference was that what followed the paper was an email telling me that my voice was strong, and my ideas were unique and special. Grayson took me under his wing and taught me what I needed to know in order to get the grades that he knew I was capable of. He made me want to pursue my path as an English teacher,” said former student, Victoria De Benedetto.

“He cares about student success and accommodates his students and those who need his help,” said another of his students. With that same spirit, Grayson decided whether the goal was met or not, he’d donate additional money raised to the Monroe Campus C.A.R.E. food pantry and the Hunger Relief Fund, a mission to fight food insecurity across southeast Ohio started by the Bengals Quarterback, Joe Burrow.

By Tuesday, the GoFundMe page donations increased substantially, and Dr. Grayson noticed he was only $500 away from the cheapest ticket with just five days until the big game. Grayson took a chance and purchased his plane ticket to Los Angeles, CA with his airline miles just in case.

“One of my friends from college saw it was $17 shy of getting to the $5,251 ticket goal on Wednesday. I kept thinking, ‘Oh my gosh, it looks like it might happen,’ and then, as it got closer, I said ‘Wow, this actually feels like it really might happen!’” Later that day, Grayson’s friends, family, colleagues and students got him to that goal.

NBC Philidelphia caught wind of the story, and when Grayson arrived in Los Angeles, an affiliate reporter in California met with him to cover the story.

Leading up to the game, he could feel the energy of Bengals fans in L.A. As part of Cincinatti’s fan club, “Who Dey Nation,” he and other die-hard Bengals fans who were dressed in Bengals gear greeted each other enthusiastically in anticipation of the big game. One of Grayson’s pre-game highlights was meeting former star Bengals running back, Ickey Woods, who played in the Super Bowl the last time they were in it back in 1988.

The day had finally come for his team to play at SoFi Stadium. “I woke up at 8 a.m., and traffic was already insane. It was unlike anything I’ve ever seen before, police on all the street corners in what looked like riot gear.” When he finally got through the gates, with a few hours to spare, he took the opportunity to soak it all in before the kickoff.

“I was able to get pretty close to the field and watch the players warming up. One of my friends told me to think of her father who passed away, and I took a picture of a card with his name on it with the field in the background and sent to her.”

Grayson even took some time to answer student emails, always thinking of his students first. As an English professor, he says he looked forward to watching a Pulitzer Prize winning lyricist, Kendrick Lamar, during half time.

Once the stadium filled with people, it was a rush like he had never experienced before this moment. “There were some huge plays from the Bengals. For instance, the 75-yard touchdown that made the place erupt at the beginning of the second half was a highlight. They were so close to winning, and my heart rate was well into the 140s. It was wonderful, and there were times I could see it going our direction. But, I stayed and watched what I could of the championship ceremony. It was a once in a lifetime moment, regardless of who won.”

Grayson’s biggest takeaway from the whole experience wasn’t about the game. “I continue to feel gratitude. Truly, my Super Bowl was that I got to feel so much affection, admiration and love.” It became something for people to root for. “There were people who were more excited about getting me there than the actual game. Two people I know just lost someone, and it became something else for them to focus on other than their grief.”

Grayson is thankful for the chance to connect with friends and people he may not have met if not for the experience. He’s building stronger relationships with those he saw come from his past to donate to the cause. Somehow, he says, the Super Bowl became just a part of it.