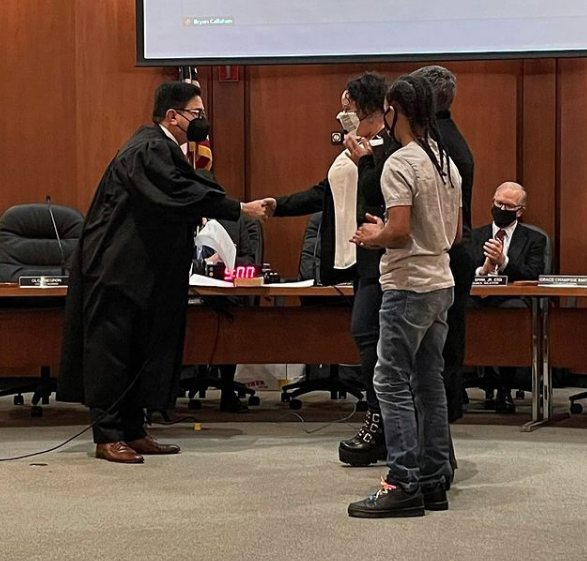 Two Northampton Community College (NCC) students have made history as they were sworn in to Easton and Bethlehem city councils on Monday, January 3. Rachel Leon, NCC global studies major, is a part of the first majority female council in Bethlehem city council’s 105-year history. Taiba Sultana, political science major at NCC, is the first woman of color, the first Muslim, the first Asian and the first-generation immigrant to serve on Easton’s city council.

“I believe representation matters, but I also would like to highlight that all the women I’ll be serving with have diverse education, values, stories and experiences they bring to the table,” Leon says. As a proud Latina and veteran, she brings her own unique background to the council. Leon was born, raised and lived on the Southside of Bethlehem until she left for the navy where she served in Virginia and Hawaii for around 10 years. In 2017, she came back with her then six-year-old son and saw that work needed to be done in the city.

“I loved growing up in the Southside, and I wanted my son to have a good life like me and be with family who was here in Bethlehem. My grandmother, grandfather and father were born and raised in Puerto Rico and eventually made their way to Southside Bethlehem.”

“When I came out of the military, I didn’t know what to do, but knew it didn’t feel right to sit back and do nothing. Once I saw my son was settled with our family in Bethlehem, I decided to go to NCC. My mom and grandmother worked and studied at NCC. It has solid gold in its teaching staff. All the professors I’ve had have completely changed my life. The perspectives they have on life, culture and more are amazing.”

Of being elected to Bethlehem’s City Council, Leon says it feels surreal.

Leon’s goals as a part of the city’s council consist of working on overdevelopment in South Bethlehem, which she says contributes to environmental issues and air quality. “I met Professor Anita Forrester in my first semester at NCC, and she took me from being introverted with little direction and helped me find my way. She took time to get to know me and find my passion, which was service.” Leon’s now President of Climate Action Network at NCC. “This made me realize I need to be at the table as decisions are being made. I have responsibility to people who might not have the opportunity I was given to be a voice.”

Civic service has been a part of Leon’s life since she was an adolescent. In high school, she went on a trip to Guatemala and helped build waterways, medical clinics, and more for the impoverished areas. After serving in the military, she helped rehab a store in Hawaii called The Attic, a free goodwill.

Easton city council’s newest member, Sultana, came to Pennsylvania from Pakistan in 2003. “I must thank you, city of Easton,” Sultana said as she was sworn in, “You have given us a home, an opportunity, and have become my extended family.”

Sultana works with the PA State Board of Education, works for NCC’s Civic Center for Community Engagement, is a student member of the Disciplinary Committee at NCC and Vice President of Student Government. Her interests lie in enacting social and civic change, which motivated her decision to enroll at NCC as a political science major. “I want to give back to my institution and community,” she says. All of this on top of being a mother of six children.

“I represent the students, mothers, women and people of color. I ensure that others have a voice,” Sultana says.

In a time of national uncertainty, Sultana believes we should be strong locally. “We can’t sit back and depend on others to make decisions for us. We should be a part of making decisions and policies that are connected to the health of our nation with a strong focus on community,” Sultana says.

Sultana wants to focus on Easton’s unsheltered population and affordable housing, working class families, economic justice, racial inequality, safety in neighborhoods and more. She wants to “address and fix what is lacking and build on what is working.”

NCC looks forward to seeing what these two motivated women do for each of their respective cities.