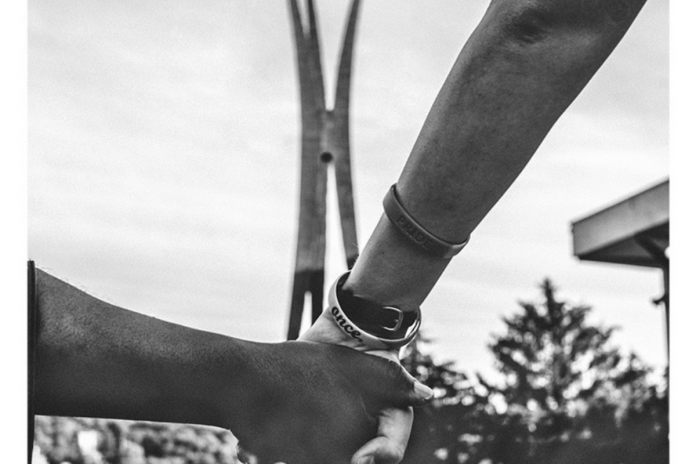 The exhibition began with a request from DEI Committee, at that time co-chaired by NCC President Mark Erikson and Professor Gina Turner, for the Art Department to commission a mural that showcases different approaches to considerations surrounding the range of human differences and multicultural perspectives.

Professors of Art Tom Shillea and Rachael Gorchov worked together on bringing this project to fruition. “We decided on an exhibition installed on removable adhesive-backed wall vinyl so that the artwork installed can change over time. We created an open call in which we invited local artists to submit works that fit this theme. We brought Robert Robinson in to help jury the exhibition and together we chose six artists who are local professional artists in various stages of their careers, NCC graduates and current NCC faculty and staff,” says Gorchov.

The artists and a portion of their statements are:

Devyn Leonor Briggs, raised in Bethlehem, earned a BFA and an MPS in the business of art and design from the Maryland Institute of Art in Baltimore.  She has maintained a studio at the Banana Factory and taught people of all ages at the Allentown Art Museum and the Bethlehem Area School District.  She has served in consulting roles at the Petrucci Family Foundation of African American Art and Raven Fine Editions and is currently a career readiness adjunct faculty member at NCC.  Additionally, she has served on the Juneteenth Lehigh Valley, the Southside Arts District Design Committee and many other civic projects.

Artist Statement: Holy Family.  (2015) “This work highlights the strength and beauty of the Black family.  By referencing some of the motifs and symbols of Byzantine art, the piece creates a contemplative and sacred space that harkens back to the faith and sacrifice Black families have had to cultivate in order to endure and thrive throughout the history of this country.”

Curlee Holton’s work has been exhibited throughout the world.  He is a renowned art professor, painter and master printmaker whose paintings, drawings and prints are held by major museums and collections in the U.S. and abroad.  His most recent solo exhibition, Journey: the Artistry of Curlee Raven Holton was presented at the University of Maryland University College.  Holton earned his MFA with a concentration in printmaking from Kent State University.He founded the Experimental Printmaking Institute and, in 2014, was appointed executive director of the David C. Driscoll Center for the Study of the Visual Arts and Culture of African Americans and the African Diaspora at the University of Maryland, College Park.  Holton was awarded an honorary doctorate in art and philosophy at the 2018 commencement in New York City.  In 2015, he received the Anyone Can Fly Lifetime Achievement Award. Spinning Glory. (2021).

Artist’s statement: “Spinning Glory” is a companion piece to “Hands Up, Nimbus.” The female figure is caught in the maelstrom of life and protesting against societal barriers of race and gender. She taps into her own divine power and shares her sense of bliss and power from her fingertips, sending her illuminated force into the world around her.”

Glenn Koehler is a photographer and writer based in Allentown, Pennsylvania. His work spans photojournalism during fires and natural disasters, to fine art displayed in galleries and museums. His photography has been featured in national publications such as The Wall Street Journal, The Washington Post and The Associated Press. His work chronicling the last days of Martin Tower, Bethlehem Steel’s former headquarters, drew considerable local attention and was featured on Petapixel, one of the internet’s foremost photography publications. Koehler is a student at NCC

Artist’s statement: “My photo was taken during a protest against police brutality outside of Bethlehem’s City Hall. A Black woman and a white woman hold hands, framing other protesters and the large sculpture signifying the unity of three Bethlehems in the background. It’s a city’s moment of unity, diversity, and peace during a time that was painful and divisive for many.”

Joni Oye Benintende recently retired from East Stroudsburg University of PA where she taught ceramics and art for 25 years. Her work has been shown in group and one person exhibitions in the U.S. and Japan. She received a BFA from Washington University in St. Louis and an MFA from Tama Fine Arts University in Tokyo, Japan.

Artist’s Statement:  “By integrating materials from the yard to the kitchen (grass, sand, gravel, flour, corn meal, dried peas) we made a variety of dorodango, large and small. We created metaphors for diversity and inclusion, and calm for our frazzled minds.”

Adrianna Rivera is an Asian-American born in Nanchang, China and raised in Easton, Pennsylvania. From a young age, she showed interest in art and often drew inspiration from cartoons and other media. Later in life, she would later implement her experience with her Chinese culture and Puerto-Rican family into her artworks, experimenting with oil, sculpture and digital platforms. A 2021 graduate of NCC, she continues to develop her style.

Artist’s Statement: “Red Thread is about my personal experience as a Chinese adoptee, showing how I am both tied to but also disconnected from my culture and my birthplace. This piece deals with diversity by sharing a glimpse of Chinese culture with the viewer. “

Anthony Smith received a B.A. from Amherst College (1999) and an M.F.A from the University of Michigan (2001). He’s showed nationally and received a Pennsylvania Project Stream grant for works exhibited in the Dreadnaught show at ArtsQuest SteelStacks in (2018). He’s been reviewed in The New York Times, The Wall Street Journal, The Boston Globe, and The Detroit Free Press. Smith taught at the University of Michigan, Princeton, and Maryland Institute College of Art and most recently at Muhlenberg College (2014- 2018). He lives in Allentown PA with a studio at the Banana Factory Art Center in Bethlehem, PA.  He is an adjunct faculty member at NCC.

Artist’s Statement:  “All Hoodies Go To Heaven/Taste the Rainbow” is the second work in my three-part series “Ollie Jean’s Hymn to Lost Black Boys”. The work is my response to the extrajudicial killing epidemic gripping the nation using the Trayvon Martin murder as a point of departure. The work, with the prices of the runaway slaves strategically crossed out, emphasizes the intrinsic value of black bodies as human while also calling attention to a shameful legacy.”