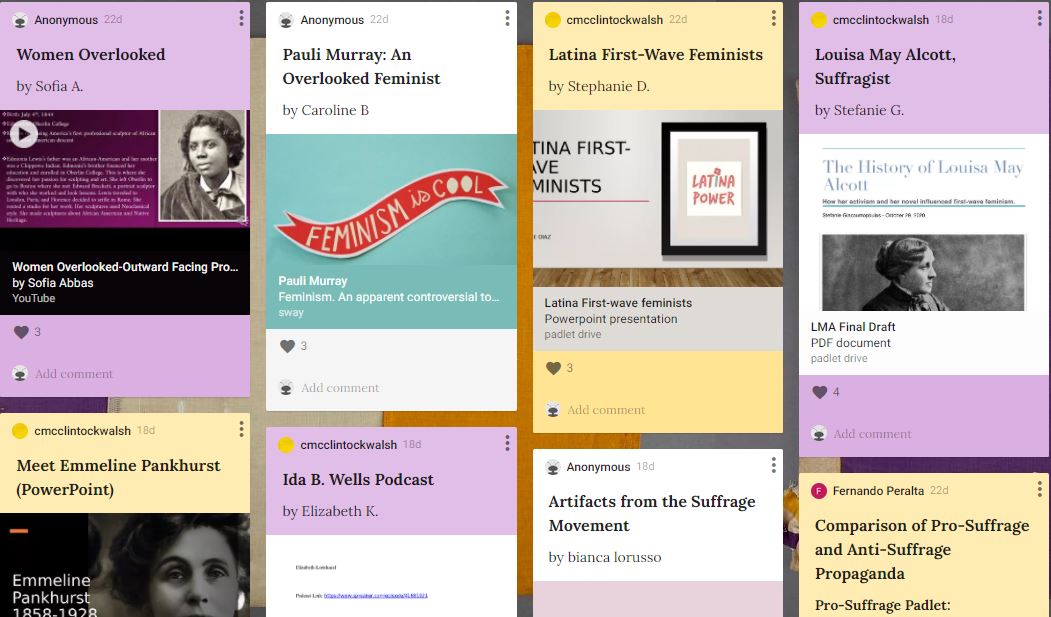 The remarkable lives of first wave feminists are fascinatingly portrayed in the work of students in Dr. Cara McClintock Walsh’s Introduction to Women’s and Gender Studies class, the honors section.  The semester recognizes the 100th anniversary of the Nineteenth Amendment, and the class introduced students to research methodologies to create multi-modal presentations.

For her project, Elizabeth Kornhausl chose investigative reporter, writer and suffragist Ida B. Wells, an African American woman born into slavery, but freed after Emancipation.  (Wells and other feminists of the nineteenth and early 20th century are referred to as the “first wave.”) “I wanted to focus on an African-American woman because African Americans had to fight for their freedom and to vote,” Kornhausl says.

Spurred by the lynching of three Black men for owning a grocery store that was more successful than a competing white store, Wells brought this atrocity to public attention and made it her mission to gather information from eyewitnesses to the thousands of mob murders of African Americans by whites.  Previously, she led a boycott against racial segregation on trains.

Wells’s life resonated with Kornhausl because violence is perpetrated frequently against African Americans today.  She thought of the Black Lives Matter movement and how, as in our earlier history, people are bringing attention to the murders of Black people in our own time.

Stefanie Giacoumopoulos enjoys Louisa May Alcott’s Little Women, and the character Jo appealed to her.  Originally, she intended to focus on feminism within the novel, but as she developed her project, she learned that Alcott had herself been a feminist and had made an impact on first-wave feminism and the Women’s Suffrage Movement.

Her most intriguing discovery was that Alcott did not plan for Jo to marry, since she wanted to concentrate on the overall life of women during this period.  But publishers of the time required that most female characters wed, Alcott ended her novel with Jo’s marriage to an older professor.  The 2019 movie, Giacoumopoulos points out, is true to Alcott’s original design for Jo to remain single.

“Doing this research, made me realize that for so long, women have been fighting for the same things: just to be respected and understood in society.  But also, in some ways, we have come a long way from first wave feminists,” Giacoumopoulos says.  “I think a lot of today’s feminists can look at Little Women and see themselves in some situations the Marches faced.”

Sofia Abbas created a PowerPoint on “Women Overlooked.”  At a time when women were often not credited for their contributions to the arts and sciences, some resilient women made a name for themselves, nevertheless.  Among the women Abbas highlighted were photographer Gertrude Kasebier and sculptor Edmonia Lewis.

Kasebier, considered the leading photographer of her time, specialized in Native American and mother-child portraits.  She gave her first exhibition at the Boston Camera Club in 1896.  Edmonia Lewis broke two barriers:  as a woman sculptor and an African American.

“I chose “Women Overlooked,” Abbas says, “because I wanted to learn more about women’s discoveries and creations in history.  We hear about men’s achievements more than those of women, so it would be a good idea to teach people about the achievements of women, too.”  Her most compelling find was Ada Lovelace, a Victorian woman who accomplished computer programming at a young age.

Caroline Bishchof felt drawn to the life ofPauli Murray, lawyer, author and civil rights leader. Murray, who was Black, struggled with her gender identity, seeing herself as a man, but presenting herself as a woman.  In civil rights, she was far ahead of her times.  Fifteen years before Rosa Parks refused to move from her seat on a bus, Murray did so.  Twenty years before the Greensboro student sit-ins, she started one.  She was denied admission to a college because of her race.

“It is amazing that even with her own struggles, she fought for equality for women and made that her first priority,” Bischof says.

At age fifty, Kim Kindred had never been taught about women’s history.  This fact, along with her sister’s interest in Native Americans, steered her to Zitkala Sa, the only Native American woman in first wave feminism.

Although Sa focused on Native Americans, she joined forces with suffragists.  “I loved this diversity and triumph,” Kindred says.  She was disgusted to see the parallels between how Native Americans and women were manipulated and suppressed.  For example, Native Americans, until the 1960s, were institutionalized, alienating them from their people and made to adopt “white” dress, hairstyles, and language. The white-male government seized Native American land and control over natural resources.  “These steps were similar to those taken to suppress women,” Kindred says.

Knowing about brave women “has inspired me to keep the faith and keep walking the path to making a difference for future generations,” Kindred says.

Sarah Shook researched Jane Adams because she was a major figure in the first wave.  She was important in international groups in the United States and in international waters.  She held many positions, in the National Consumers’ League, National American Women’s Suffrage Association, the Labor Committee of the General Federation of Women’s Clubs, and more.  Her founding of the Hull House Settlement helped single working women have a place for peace and shelter.

“I give kudos to women like Jane Adams and Elizabeth Cady Stanton to achieve the fight for suffrage, but it is outstanding to push harder for bills and policies to be passed as early as 2021,” Shook says.

Stephanie Diaz is proud to know about Latina women involved in the first wave.  Among them are Jovita Idar, who founded the League of Mexican Women in 1911 and Josefina Fierro, who played an important role in stopping violence against Mexican youth in the 1920s in Los Angeles, and other notables.

“I learned that women are very powerful,” Diaz says, “And it amazes me how Latina women made a huge impact!” She adds that Latina first wave feminists stood up for all women and by accomplishing so much, opened doors for Latinas and all women now.  “Now we can vote,” Diaz says. “We can show that we can do as much as men can.”

To access these projects and many others, visit https://padlet.com/cmcclintockwalsh/emttyjb7pdqticqq.