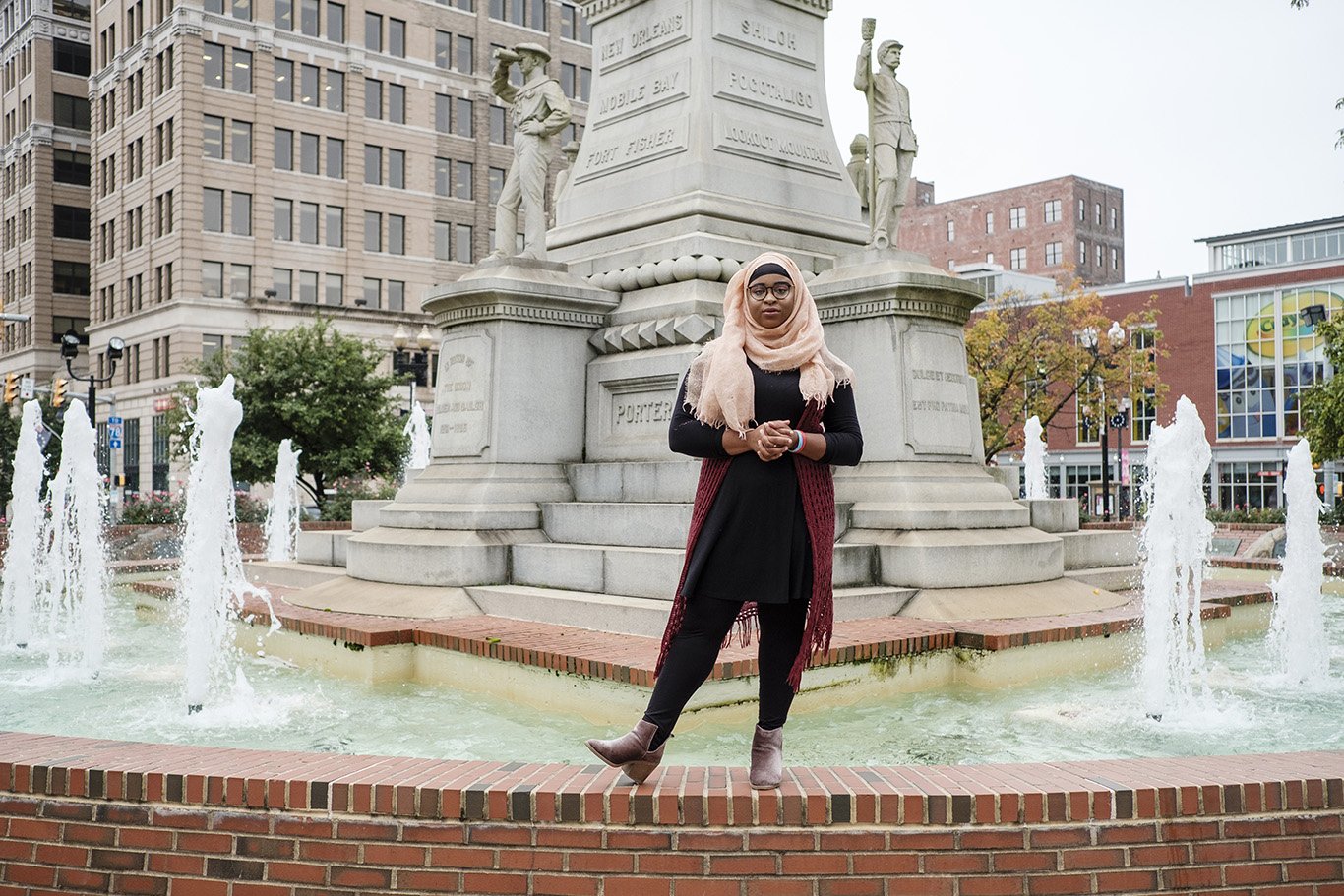 It would be an understatement to say my life is turning out differently than I thought it would,” mused Annisa Amatul Muqtadir, ’18. But the Easton, Pa., native says she thinks everything that’s happened has helped her to appreciate the life she has and all that has come with it.

“I’ve learned ‘it is better to show appreciation than to take things for granted’” quoting a fortune cookie taped to her wall. The 20-year-old NCC alumnae learned early that life’s path is neither straight nor easy, and that often, you must rely on the experience and goodness of others to keep moving forward.

Those lessons began very early in life for Amatul Muqtadir. She was placed in foster care at birth, with her biological mother suffering from drug addiction. She went home with her adoptive parents, Falaah Abdul Muqtadir and Taalibah Muhammad-Muqtadir, when she was just 5 weeks old.

I’ve Grown so much in so many ways. it was rough in the beginning and not all easy, but I treasure every moment…

Generally, however, she was a happy child, spending her time climbing trees, riding bikes, caring for stray animals and writing. “I was always making up stories in my head and writing them,” Annisa said.

Growing up the youngest of six siblings in a black, Native American, Muslim family living in a  predominantly white area of Easton was the only life Amatul Muqtadir knew, and it was not without some stress. “I loved my neighborhood and growing up in Easton, but we were different, and sometimes that was difficult,” she recalled.

With high expectations for their children, Amatul Muqtadir’s parents homeschooled her, keeping her firmly on a college pathway. “It wasn’t if I’d go to college, it was just a matter of where I’d go,” she recalled. “My parents are both educated and that was their expectation for us.”

As she began to consider her future, Lafayette College stood out as an obvious choice. Amatul Muqtadir had become acquainted with Lafayette students who served as tutors when she participated in a community program as a grade-school-age student. She visited campus and attended open houses there.

When she received her high school diploma in August 2015, she set her sights on the college that she knew, applying as an English major. “In March, I found out that I wasn’t accepted there,” she recalled. “They told me there were areas where I needed work. It was really devastating, but it also turned out to be a blessing.”

That blessing came in the form of Northampton Community College, where Amatul Muqtadir reluctantly enrolled as an English major. “I was going to stay for just one year and then transfer,” she said. “Instead, it ended up being one of the best experiences of my life.”

While intent on getting settled into her classes, Amatul Muqtadir initially found it difficult to adjust to college life. Confused, she reached out to the Student Affairs Office for help. During her first semester, a NCC counselor informed Amatul Muqtadir that she dealt with social anxiety.

“Before I even knew what to call it, my social anxiety had really affected my experience,” she recalled. “Once counselors helped me to realize what was happening with that, I was able to do better.”

Despite her intent to stay on campus for only a year, Amatul Muqtadir found herself drawn to NCC’s student life activities. She soon was immersed to the point that Miranda Baker, Student Life & Leadership Development administrator, suggested she apply for a work-study job with the Student Life office. “That just made all the difference,” Amatul Muqtadir said. “I was helping and facilitating events. I got to meet so many people and do so many different things. Miranda was key in teaching me how to engage with students while facilitating events to make them feel welcome. She constantly said, “Be a good person,’ and to this day, I practice that.”

Active in various clubs and groups, she was committed to improving campus diversity and bringing students of different backgrounds together. As her on-campus involvement evolved, so did her academic interests.

“I began shifting my interests toward psychology,” Amatul Muqtadir said. “I remember sitting with friends and asking them about their courses.” After taking Associate Professor Jeffrey Armstrong’s abnormal psychology course, Amatul Muqtadir was hooked.

“It was my hardest class, but it was my favorite,” she said. “I learned so much and it motivated me greatly. It was just revolutionary. Jeff made my transition into psychology wonderful and has paved the road for me to succeed.” The once-reluctant English major graduated from NCC last May as a psychology major and is pursuing a bachelor’s degree this fall at Moravian College in hopes of working in conduct and counseling in higher ed.

“I used to tell Mitch (Murtha, former NCC assistant dean of students) that I would take his job someday,” Amatul Muqtadir said. “We’ll see.” Amatul Muqtadir is thankful for the network of mentors she acquired while at NCC, all of whom were dedicated to helping her succeed. “I feel like I’m a different person than when I started there. Mentors like Mitch, Jeff and Miranda made the difference. I wouldn’t be where I am now without them,” she said. “I’ve grown so much in so many ways. It was rough in the beginning and not all easy, but I treasure every moment I spent there.”

From the Amazon to Pennsylvania and Back

A Sad Day for Our Nation

Not only has Melissa Benzinger McGlynn been chosen as a graduation speaker for winter commencement, she has also earned the prestigious All-PA...
View Post
Student Stories

Jodi Winters, a liberal arts/English major from Meadville, enrolled at NCC because “I felt that I was being called to. I am...
View Post
Alumni Spotlight

Life can throw you curveballs, but it’s how you hit them that makes all the difference.   Chris Voag ’14...
View Post