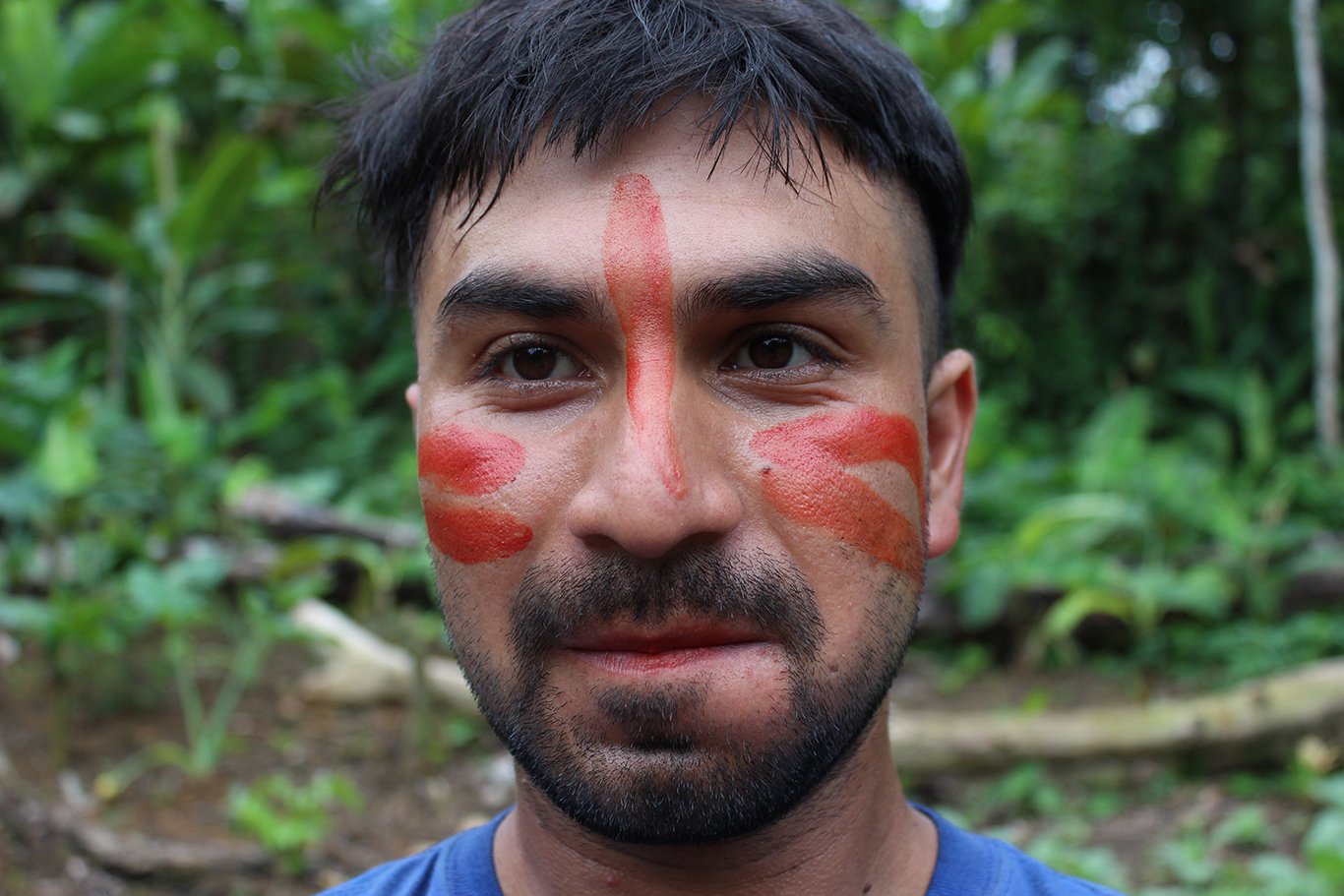 What’s it like to reunite after 20 years with a mother who is a member of a remote Amazonian indigenous tribe? David Good, a Northampton Community College biology professor and founder of The Good Project, calls himself a Yanomami-American. While it’s pretty typical in America to have parents who come from two different countries, Good’s story is quite unique.

The story begins in 1975 when American anthropologist Kenneth Good travelled to the Amazon to study the Yanomami, who live on the border between Venezuela and Brazil in a region known as the Upper Orinoco. The Yanomami are one of the last indigenous groups that have minimal contact with the “outside” world.

“What was supposed to be a 15-month research project ended up as a 12-year stint in the rain forest,” Good shared.

His father lived with the Yanomami, who have no written language and no calendar. “Everything they need they extrapolate from the rain forest,” Good said. “He learned the language, hunted with them and became one of them.”

The Yanomami encouraged David’s father to take a wife. He was reluctant at first, but agreed to be betrothed to a girl named Yarima. The betrothal lasted for years before the marriage was consummated, and in that time Yarima became a woman. First a friendship developed between the two, which later blossomed into a romance.

“She learned English and basic math.  Yet she was like a fish out of water.”

Yet it was not possible for Kenneth Good to live in the Amazon indefinitely. He needed special permits to remain. So Yarima agreed to return with him to the western world.

“It was like going in a time machine and fast forwarding 2,000 years,” Good said of his mother. “It was a huge culture shock. The first time someone turned on a car, she ran behind a bush and hid. She thought it was an animal. When she first saw her reflection in a full length mirror, it so scared her my dad had to cover it with a blanket.”

Even though everything was unfamiliar to Yarima, there were certain things she embraced about America. “She loved carnivals, the beach, shopping, and French fries. She even loved 1980s perms,” said Good with a laugh as an image of his mother in a salon, with her straight hair transformed into curls, came on the screen of his presentation. “She learned English and basic math.  Yet she was like a fish out of water.”

Together, Yarima and Kenneth had three children and lived in New Jersey. They were able to return for rare visits with the Yanomami, but it was not enough for Yarima.

“My dad’s dream was to have a foot in both worlds,” said Good. “But with permits and red tape, it was not possible.”

In America, there was no way for her to contact her Amazonian family. And unlike the Yanomami, who hunted, worked, and spent all their time together, Yarima could not understand why her husband had to leave for work for hours every day.

During a visit to the Amazon when David was five, his mother stayed behind. “”She couldn’t live another day in this impersonal world where you walk by people without acknowledging them.”

The family, without Yarima, eventually moved to Pennsylvania. His mother’s absence was a tremendous hardship for Good. “I thought I wasn’t good enough, not Yanomami enough for her. I felt abandoned and rejected. I began to hate her and hate myself. Even though I was a typical kid with a paper route who played baseball, every time I looked in the mirror I saw my mother.”

As he grew older, he decided to take a step of faith and read the book his father wrote about living with the Yanomami. “I began to understand why my mom left. I forgave her. She couldn’t live here. Once that happened, it was like the floodgates opened. I wanted to learn everything I could about my mother and the Yanomami.”

Dr. Hortensia Caballero, an anthropologist, agreed to help Good make the trek to the Amazon in 2011, when he was 25. Going up the Orinoco River, Good had a flashback to visiting as a small child. “I remembered the sultry air, the temperature of the water.” He had memories of playing in a creek and being taught to shoot a bow and arrow.

When he first arrived, his mother was not there. She was now living in another Yanomami village. While he waited for her, he was completely mobbed by Yanomami. “They couldn’t stop touching me. They were fascinated. They knew I was one of their own, yet Yanomami don’t have facial hair.”

When his mother appeared, Good had a moment of panic. “I thought, ‘Oh crap, what do I do?’ All I wanted was to run towards her and hug her, but Yanomami don’t do that. Instead, I put a hand on her shoulder and she did the same. We both started crying and I was flooded with memories of having a mother. The fact that I could have my mother back was all that mattered. She was here.”

He also met his uncle, who through a translator gave Good his Yanomami name:  a long way around or detour. “I left my village a long time ago and it took me a 20- year detour to get back home,” said Good. “I went from absolutely hating and renouncing my heritage to embracing it.”

Embrace it he did. He lived among the Yanomami, staying in a communal shabono, a roundhouse structure and the center of Yanomami life. “It’s your dining room, living room, kitchen. You’re born here, you die here, you play and eat here.” He braved malaria and vampire bats, and eating anteater, peccary, monkey, snakes, tarantulas (a delicacy!), termites and fish. He learned to hunt, fish, climb, and to use the rain forest like a grocery store.

“Boa constrictor was my favorite. After being there a few days, my mom’s English slowly began to return. She dumped a dead boa constrictor in front of me and said ‘Hey, you want some snake?’ in perfect English,” he laughed.

Not only did Good learn rain forest survival skills, but his Yanomami family taught him something else. “They taught me how to be human, how to live. They live a life based on reciprocity. They share everything. When I opened my emergency rations of crackers and jelly, I had to share it with the entire tribe. To do anything else would have been completely unthinkable.”

Before embarking on the trip, Good worried about jaguars, snakes, and other menacing creatures found in the Amazon. “Who knew marital problems would be my biggest worry?” he joked.

His mother presented him with two women. He was told they were his wives and he should have children with them. The women were insistent on fulfilling their marital duties and there was a culture clash as Good politely declined.

Yet it’s unfair to generalize and homogenize a group, Good warns. Some tribes of Yanomami have lived closer to missionaries and other settlements, giving them more exposure to different cultures.

“There are urban Yanomami who are educators and nurses. Some live in villages with individual huts. Some Yanomami children are in school, some play soccer. The times are changing. Traversing politics, healthcare and rapid rates of acculturation is overwhelming for them. I think it’s the reason why I was born and raised in the western world, so I could understand both cultures and help,” said Good. “When I came home, I started an organization called The Good Project.” The Good Project aims to help remote indigenous groups, not only the Yanomami, cope with their modern day struggles while preserving their traditional way of life.

“They may look like ‘primitive’ people but something about the way they live is superior,” Good said. “They don’t know loneliness, they don’t suffer from depression or anxiety. Their language doesn’t even have a word for suicide.”

Good has been back since his 2011 trip and is working on bringing his mother to America for a visit.

“She said, ‘Take me there. I want to see Kenny,'” referring to Good’s father. Yarima also longs for “pizza, apples and peaches, and of course, French fries.”

A Story to Die For

A Most Unexpected Life