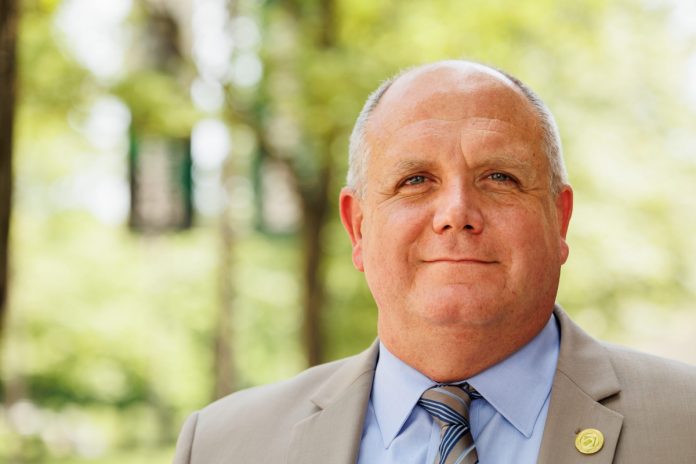 When a young David Ruth graduated from Hagerstown Community College in Maryland more than 30 years ago, even then he knew he wanted to spend his life involved with educating and teaching students. It was his passion.

Little did he know that passion would lead him to ascend to the very top of academe, culminating this week with his being named as Northampton Community College’s fifth president. Ruth’s appointment follows a national search which attracted highly qualified candidates from as far away as Utah, Florida, California, Illinois and Oklahoma.

But in the end, the highly regarded community college looked within its own ranks for its next president in naming Ruth, who is the current vice president and chief of staff under outgoing NCC President Mark Erickson. Erickson plans to retire at the end of June.

“We couldn’t be more pleased with our selection,” said NCC Board of Trustees Chairman Robert Fehnel. “We felt Dave in many ways was uniquely qualified to be our next president. As a community college graduate, he identifies with our students and their needs; as someone who has worked at NCC in an executive role, he well understands the heart and soul of our college; and as someone who has been part of the leadership team at a major university (Drexel), he brings a fresh perspective that will forge our successful future.”

“This is such a special place with so many great past achievements and so many outstanding opportunities,” said Ruth. “It is a college of possibilities, of incredible promise, enormous potential and a depth of talented, truly committed people that are the life blood of NCC.”

“I am honored and excited to lead NCC as its next president.”

Ruth said he owes a debt of gratitude to outgoing President Mark Erickson for his work in shaping NCC into what it is today. “He has left an enduring legacy that has made NCC one of the nation’s community college jewels,” he said. That legacy includes one of the largest endowments of any community college in the nation, having more than doubled in the last decade to $86 million.

Since then, he has left quite a mark in higher education. He flourished during a 23-year career at Drexel, that included an 11-year stint as dean of students and chief student affairs officer where he led a division of more than 120 staff members who provided curricular and co-curricular programs and services across multiple campus locations for 26,000 students. Ruth also served on the President’s Executive Council and Provost’s Council of Deans.

He joined Northampton Community College as vice president and chief of staff in 2016.  In his role, he serves as chief advisor to the president while directing strategic planning, institutional research, planning, government and community relations, diversity, equity, and inclusion efforts as well as global education and international student services.

Through it all, his love for education has never faded. “I managed to remain active in the classroom as an adjunct instructor, teaching graduate and undergraduate courses (online and face-to-face) in mathematics, statistics, management, higher education and student development,” said Ruth.

“It’s been important for me to do that to really appreciate the challenges students and faculty face every day, especially during the pandemic.”

NCC Names Dr. David A. Ruth as Its Fifth President

NCC Names Dr. David A. Ruth as Its Fifth President