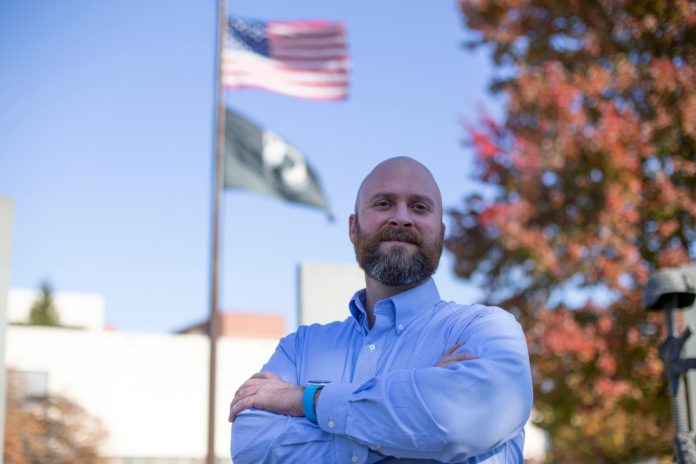 Many consider those who serve and have served our nation in the military as heroes. They stand out not only for their sacrifice and courage, but for their resourcefulness and determination. But when military service ends, the transition for veterans to civilian life can be a rocky one. At Northampton Community College (NCC), veterans making the move to higher education are greeted by a friendly face, one who has walked a mile in their boots: Shane Hale, program manager of NCC’s Adult & Military-Affiliated Student Services.

“Many student veterans have reported they feel isolated from their peers on campus and also feel set apart from faculty and staff in the academic environment,” Hale says. “This sense of isolation could lead to decreased enrollment and present a risk to persistence if not addressed.”

Hale, a Mississippi native, has a slight Southern twang to his voice and an easy-going, welcoming manner that instantly puts you at ease. His peaceful demeanor gives no clue to his own experiences of isolation and confusion as a combat veteran entering a college classroom.

Enlisting in the army was a means to an end for Hale, who had his sights set on higher education. When his first morning of boot camp took place on September 11, 2001, he knew his time in the army was going to be much different than what he had anticipated. He deployed twice to Iraq, earning the Army Commendation Medal for improving logistic operations and procedures for the 96th Aviation Support Battalion for maximizing efficiency during his deployments.

Like many veterans, his first step on his higher education journey was community college.

“My experiences inform my practice. I have been in their [student veterans] shoes and faced all the challenges and made all the mistakes. As someone who has been through it and been successful, I feel I am suited to help,” Hale shares.

He transferred from Durham Technical Community College to University of North Carolina at Chapel Hill, and is currently pursuing a master’s degree in higher education at Penn State University.

As an undergraduate, he faced great challenges. “There were no services for veterans. I barely graduated.”

Yet, he persevered and made it his mission to help other veterans. After graduation, he began with an entry-level job at UNC, and during that time helped create the Carolina Veterans Organization and contributed to creating a campus Veterans Resource Center before being named a program coordinator of the center, where he established and managed an onboarding transition program for student veterans. When the grant that subsidized his position ended, he began work at NCC in July of 2021.

According to Hale, the greatest challenges veterans face when transitioning from the military to higher education are:

“Student veterans convey mixed feelings about their campus environment and for them to be successful, he or she must have a sense of belonging to the institution,” explains Hale.

To address that sense of belonging, Hale’s plans include having the college adopt a veteran friendly environment model which involves a variety of factors of specialized support including admissions, funding, communication, and services. He’ll be launching Green Zone training for faculty and staff soon, which helps educate about military culture and student veteran-experiences.

While veterans do face challenges returning to school, they also “bring desired skills to the classroom, due to their training and military socialization.” Hale shares that they tend to be more:

• Resourceful: veterans will use all the resources available to accomplish their goals, even when resources are limited.
• Persistent: veterans refuse to take no as an answer.
• Goal-Oriented: academic plans are designed to favor the task-oriented mindset of a veteran.
• Team Work Oriented: service members do everything in teams and are used to working in groups.

A dream of Hale’s is to institute a Student Veteran Center on campus, a space dedicated to serving military personnel and veterans. Developing a center such as this will take time, planning and resources. Hale hopes to begin this process in a manner that respects the needs and interests of students and the institution. He envisions a meeting space that veterans, “throughout the day can engage with their peers who understand the issues and challenges that stem from transitioning from combat to classroom. A center would offer a chance for student veterans to experience again the bond they shared with other service members when serving.”

In the meantime, Hale is hard at work applying the ideals of the veteran friendly environment model to his plans. As his scope also encompasses adult students, he is well-poised to help there, too.

“I was a non-traditional student and a veteran,” Hale says. “There are much crossover strategies when supporting adult and military-connected students.”

If you are a veteran considering NCC, visit the college’s Veterans Admissions Page for resources to help you on your journey.