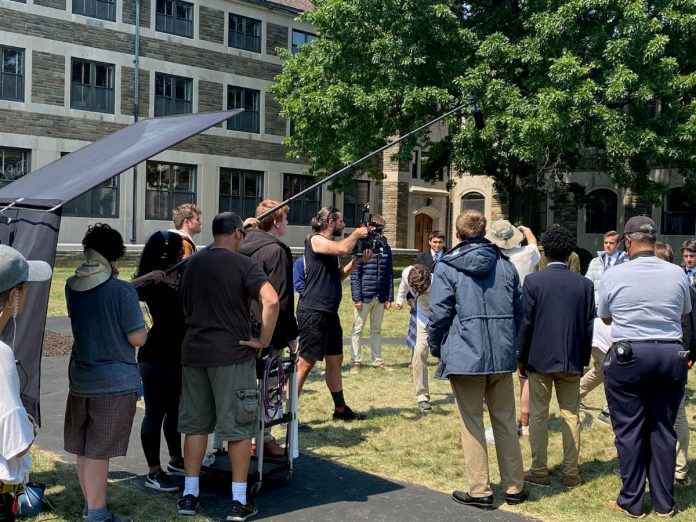 Some Northampton Community College (NCC) media production majors got valuable, real-life experience over the summer serving as interns on the sets of actor and director Danny Roebuck’s upcoming film, “The Hail Mary.”

It is the third film that Roebuck, a Bethlehem native known for his roles in the television shows “Matlock,” “Lost,” and “Glee,” among others, has shot in the Lehigh Valley. The films are produced though Roebuck’s nonprofit, A Channel for Peace, which focuses on faith-based entertainment for families.

For Logan Desris, an NCC sophomore, the opportunity was a dream come true.

“It was such a great experience that taught me so much. I really love film and I know that it’s what I want to do for a living. To have had this opportunity felt like the chance of a lifetime,” Desris said.

Mario Acerra, a NCC professor and coordinator of the college’s media production programs, attended the same high school as Roebuck and has remained in touch with him over the years. Roebuck visited Acerra’s classroom before the start of the pandemic to spend time with students.

“He’s a tremendously nice person,” Acerra said. “He had a very positive outlook and gave students a very upbeat message.”

The internship experience, which was arranged in conjunction with Lehigh-Carbon Community College, was not only helpful for the students who participated, but to Roebuck and the film production crew, as well.

“They needed some help, and we were able to supply some talented students to provide it,” Acerra said. “It’s an example of how the college can act quickly to meet community need.”

Amaris Rodriguez, a sophomore media production major, agreed to do the internship because it was a requirement for graduation, but said it turned out to be far more valuable than the credits she earned.

“I took the internship for college credit, but I would have taken it anyway because it was an amazing opportunity that was too good to let slip through my fingers,” Rodriguez said.

Rodriguez was assigned to the film’s social media department, taking photos and videos of the cast and crew to post on various social sites. Her work, however, was not limited to that area.

“When I wasn’t busy with that, I was able to explore different departments like sound and camera,” she said. “I spent a lot of time helping sound, and even got to record some scenes and hold the boom mic. I also helped with the art department when they needed an extra hand creating the set. Overall, I got to help with everything.”

Filming for “The Hail Mary,” which is about a nun who meets a troubled, struggling man (Roebuck) and convinces him to start and coach a football team at the boy’s high school she runs, took place in July and August at various locations around the Lehigh Valley. Prior to filming, the interns, which included students from NCC, Lehigh Carbon, DeSales University, and Kutztown University, spent some time cleaning the former Mary Immaculate Seminary in Northampton, the main setting for the movie.

The seminary, which trained candidates for the priesthood until 1990 and later served as a retreat center, is now owned by the Jaindl Land Co., which plans to convert it to a resort and spa.

“We spent a lot of time at the school, but we were all over place,” Desris said. “We were at a diner and Dorney Park, and we spent a week at the Bethlehem School District’s stadium doing night shots. Those were hard, but I enjoyed them. It was almost as if the rest of the world had shut down while we were there.”

In addition to working in the grip and electric department, Desris was one of about 25 locals cast as members of the opposing team’s football squad.

“That was a real bonus and so much fun,” he said. “I didn’t expect to get a chance to do that, and it was great.”

Wendy Barron, the department head of communications, media, and the arts at Lehigh Carbon, coordinated the interns for “The Saving Grace.”

The experience for students, she said, was advantageous in many ways.

“They earned legitimate credits on a feature film, and that’s a big deal for a student in the Lehigh Valley,” she said. “They were interns, but they were also PAs (production assistants).”

She praised the students who participated, saying their enthusiasm was contagious.

“There were long, hot days and overnight shoots, but they always came in with a great attitude and all this energy,” she said. “It was really refreshing.”

Student-Athletes Help at the Holidays