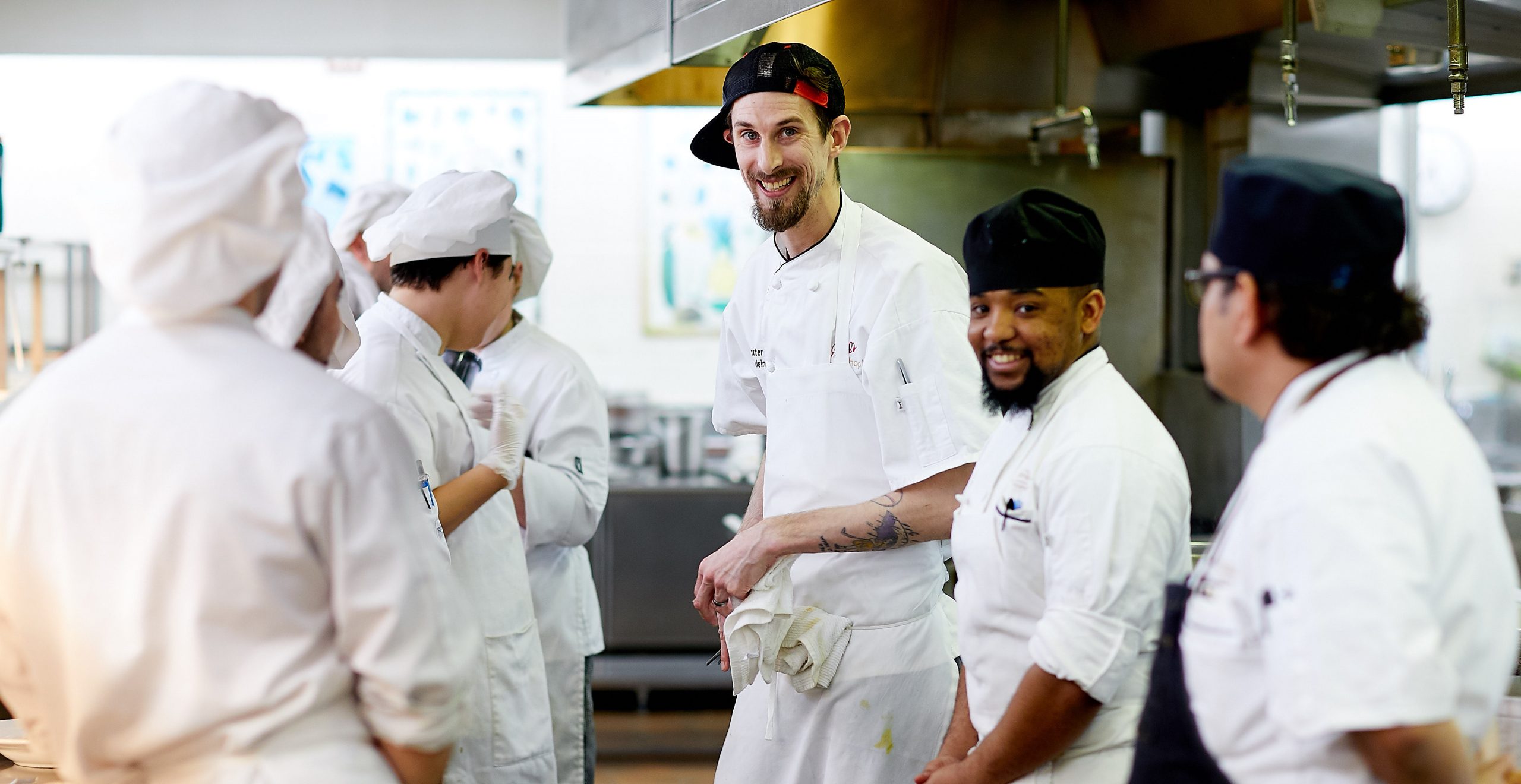 For Tyler Baxter, there is no place like home.

A gastronomical wonder who has rubbed elbows with the likes of legendary chefs Emeril Lagasse and Guy Fieri, and served as executive chef at more than a few top restaurants, his return to the very place where he cut his culinary teeth as a young student has been a homecoming to remember.

The latest chapter of Baxter’s career du jour started in early September as he took over the role of chef instructor in Northampton Community College’s highly respected culinary program, teaching others the trade he has savored for nearly a decade. It’s the very same program he graduated from in 2013 as a fledging Gordon Ramsey.

A former head chef at restaurants like The Bayou, Grain, and Emeril’s Chophouse, and most recently executive chef at Notch, Baxter plans to pass down all the invaluable knowledge and skills gained through his experience. But surprisingly, he says he also plans to learn from his students.

“Every one of us has something to teach the other, and being willing to understand that has made me who I am today,” says Baxter, a recipient of NCC’s 50th Anniversary Distinguished Alumni Award.

Looking back, Baxter never dreamed he would experience all that he has. Out of necessity, he joined the workforce right out of high school; college was not an option. And then one day he landed a job at a trendy, newly-opened restaurant, Cosmopolitan in Allentown, and something happened. The excellent food and the comradery amongst the staff sparked a strong passion in his heart to play a role most take for granted, which as he states, was “to be that face behind the curtain bringing joy to complete strangers through the power of food.”

With this new fervor, Baxter decided it was time to take it to the next level and enrolled into NCC’s culinary program. When asked what drew him to NCC, Baxter explained it was a combination of the quality of the program and the convenience of being able to continue to work full time while pursuing his degree. He also noted that he was privy to the thoroughness and dedication of the professors from doing events at the college prior to attending.

Baxter flourished both academically and professionally while enrolled at NCC, taking on increasingly more responsibilities at Cosmopolitan. Then the summer before graduation, his hard work paid off as he was selected as one of the first students to train at Emeril Lagasse’s restaurants in New Orleans. Baxter describes it as one of the greatest highlights of his career as he worked alongside his peers and was mentored by prominent culinary experts.

That experience coupled with everything he learned at NCC became a launching point. Within months of graduating he landed a new position, this time as chef de cuisine for Tapas on Main in downtown Bethlehem. And his journey only gets more impressive.

Chef Baxter continued to move up, becoming the executive chef for both The Bayou Southern Kitchen and Bar in Bethlehem and Grain in Allentown. His exceptional talents soon opened the doors for a position at Emeril’s Chop House where he learned the corporate structure of the industry, participated in multiple Lehigh Valley Food & Wine Festivals, and managed larger scale events.

Most recently, Baxter was the executive chef at Notch Modern Kitchen & Bar, where he executed the opening of the restaurant including menu concept, staff infrastructure, and kitchen design. Though COVID-19 had posed a multitude of new problems in the operation of running a restaurant, Notch was voted “Best Take Out” and “Best New Restaurant” by Lehigh Valley Style, much to Baxter’s credit.

It was the perfect prelude for his return to teach at his alma mater. Though it was something he always wanted to pursue, it was becoming a new father that pushed him into academe. Wanting a job that would allow him the opportunity to be there for his son, NCC was the perfect fit, opening the door to be able to give back to the next generation of culinary professionals at the institution that has helped him and so many others succeed.

Better yet, he will be working alongside other NCC culinary alums like Chef Will Rufe ‘07, the program’s operations chef who has worked in numerous restaurants across Pennsylvania, and Cynthia Litzenberger ’99, the program’s administrator who pursued her culinary passion after working as an LPN.

When asked which person influenced him the most at NCC, Baxter named his biggest advocate and past instructor Chef Susan Roth. He still maintains contact with her as a friend and mentor and recalls her kind and generous heart that was always open to her students’ ideas. “Her attitude was and always will be something I try to emulate.”

Baxter is now looking forward to learning even more from Chef Francine Marz, director of the college’s culinary arts program, expressing his utmost gratitude to her and everyone else for giving him this amazing opportunity. Yet, even greater is NCC’s excitement to see all that Chef Baxter will bring to the table!

Student-Athletes Help at the Holidays