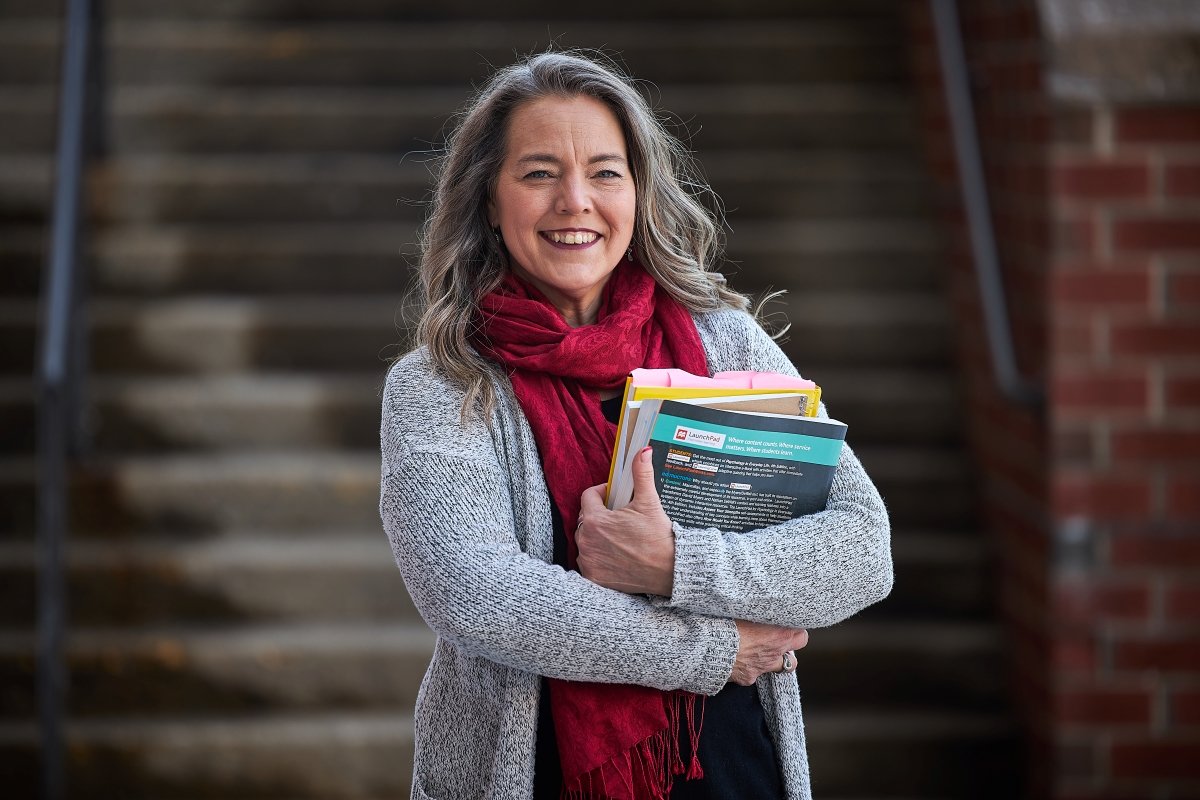 Kim Kindred has faced some pretty big obstacles in her life. But thanks to a formidable spirit and support from family, friends, and faculty members at Northampton Community College, her future is looking very bright.

Kindred, 51, was recently accepted as a Frances Perkins scholar at Mt. Holyoke College in South Hadley, Massachusetts. Mt. Holyoke is one of seven highly selective, historically women’s liberal arts colleges in the Northeast known as the “Seven Sisters.” The schools were founded to provide women with educations equivalent to those offered at Ivy League colleges. The highly competitive Francis Perkins program, which provides financial support for qualifying non-traditional students, will enable Kindred to pursue a bachelor’s degree at very little cost to her.

“It’s such a huge opportunity for me to get into this program at this school,” said Kindred, who currently lives in Nazareth. “When I learned I was accepted I just sat down and cried.”

She plans to move to South Hadley to begin classes  in August. Kindred credits faculty members at NCC for encouraging her to apply for the program as well as explore her options at several other top-tier colleges.

“There are certain faculty members here who I cannot thank enough,” Kindred said. “They’ve talked me through all the problems I encountered and have just been rock stars for me.”

“Kim is a very talented student, but just as impressive as her intellect are the life experiences she brings to the classroom. As a student and a person, Kim shows the way education can help us write our own stories.”

Kindred discovered NCC at the same time as her daughter, who had her heart set on going to another school but agreed to look at Northampton as a backup. They both, as Kindred said, were “blown away” during a campus visit – so impressed with the college’s facilities, faculty and curriculum that they quickly decided to enroll.

“I was looking at schools because I had to leave a career I loved but could no longer handle physically, and my daughter was looking at NCC as a possible alternative to her first choice,” Kindred explained. “We discovered NCC together and it’s been the best thing for both of us.”

Thirty-four years after graduating from high school, Kindred is discovering there is still a lot to learn.

“I started taking classes and doors began opening,” she said. “I found I was able to understand my life and my world so much better, and that was really empowering to me.”’

Like that of so many people, Kindred’s life has had its ups and downs. She experienced years of undiagnosed, chronic health issues that forced her give up her career of training horses and teaching others to do the same. A divorce resulted in serious financial problems in addition to emotional distress, and a child struggled with addiction issues.

“I was under a lot of stress for a very long time, and I didn’t realize what it was doing to my body,” explained Kindred. “Finally, I just crashed.”

Kindred was still experiencing health problems when she enrolled at NCC, but she was determined to stay on course.

“I was doing the best I could, but I had constant body pain and a brain fog that sometimes prevented me from even reading a book or watching TV,” she said.

Surrounded by faculty and staff who were anxious for her to succeed, she shared her circumstances and was met with understanding and empathy.

“I had a hard time admitting my health problems, but once I told my profs what was going on, they were incredibly supportive,” Kindred said. “I guess I wasn’t expecting that. It took so much pressure off me.”

A period of self-discovery

Free to concentrate on her classes without fear of falling behind, Kindred excelled both academically and personally.

“I was taking these classes that were just incredible,” she said. “And then I took a course in women and gender studies.”

It was during that course she began to understand what had happened to her while working in a job shortly after graduating from high school.

Although she didn’t have a name for it at the time, Kindred experienced sexual harassment on the job. She complained to her boss about the treatment she’d received but was ignored.

“I knew what happened to me wasn’t right, but I didn’t know how to talk about it back then,” she said. “Taking that women and gender studies course really impacted me because it showed me that what occurred is a systemic problem. It’s not something that happened just to me.”

Cara McClintock-Walsh, who taught the course, said the life experiences Kindred shared in her class were huge.

“Kim is a very talented student, but just as impressive as her intellect are the life experiences she brings to the classroom,” McClintock-Walsh said. “As a student and a person, Kim shows the way education can help us write our own stories.”

Self-discovery has continued for Kindred, and it’s become increasingly clear she must continue her education to gain the tools she needs to help others.

Rebecca L. Martin, a faculty member in NCC’s English Department, worked with Kindred to explore career options and encouraged her to apply for the Frances Perkins scholarship. Martin, who also suffers from a chronic illness, said Kindred’s positive outlook is inspiring.

“We had some great conversations about career paths that would accommodate chronic illness,” Martin said. “I was bowled over by her ability to work through setbacks and focus on positives.”

Laying the groundwork for helping others

Kindred plans to pursue a master’s degree and a Ph.D. after completing her undergraduate work. She looks forward to a future in which she will direct a facility that focuses on health psychology and offers therapies including equine, Reiki, talk, dance, movement, and others.

“I envision a campus with many therapy options,” Kindred explained. “I want it to be accessible to anyone looking for help.”

Kindred understands her dream is years in the making, but feels she is simply laying the groundwork for something that will come to fruition in the future.

“I want to create a legacy that others will continue to nurture and grow,” she said. “I’m just laying the foundation. I’ll trust that someone will realize the vision and make sure it continues.”

While the future is bright, Kindred still experiences health concerns and times of uncertainty. She refuses, however, to dwell on what she cannot do, constantly looking forward while learning from the past.

“Kim keeps her eyes focused forward,” Martin said. “She doesn’t dwell on what might have been but wonders what she’ll be able to do with these new perspectives she’s gained. She thinks of all experiences as a value add, even the painful and difficult ones. She’s taught me a lot along the way.”