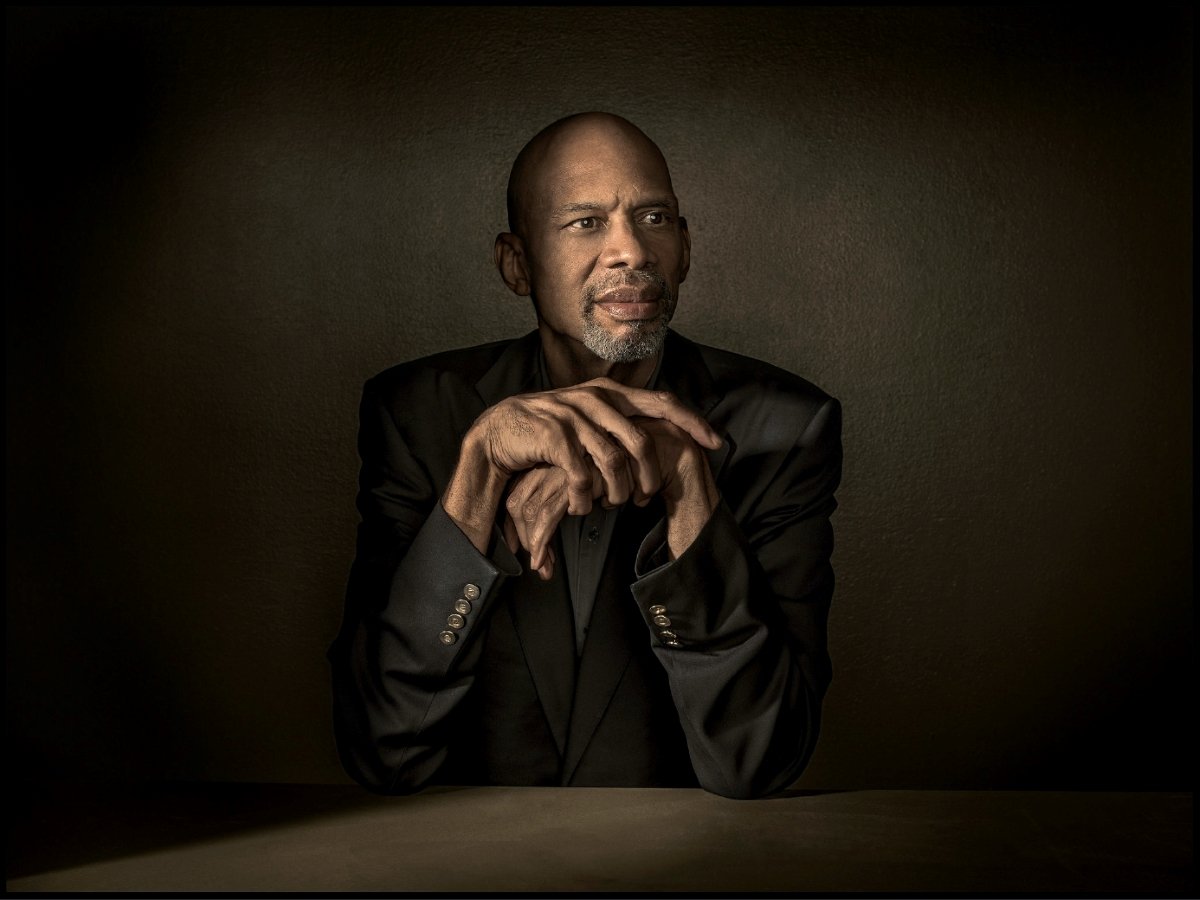 He made a name for himself with his unblockable skyhook shot and rode it to become the NBA’s all-time leading scorer. He didn’t stop there. Kareem Abdul-Jabbar, a Presidential Medal of Freedom recipient, is also an author, columnist, historian, television and film producer, actor, social justice advocate, and founder of the Skyhook Foundation, which gives students living in underserved communities the opportunity to study science, technology, engineering and math.

Any one of these things is something to be proud of. Achieved altogether, they make up a living legend, someone who has accomplished more in a lifetime than many of us can dare dream. Northampton Community College (NCC) had the honor of hosting Abdul-Jabbar as the college’s Annual Humanities keynote speaker on April 8.

“Each year the Humanities Endowment provides the opportunity to bring a nationally renowned keynote speaker to our college and public communities.  This year there could have been no better choice than Kareem Abdul-Jabbar.  Mr. Abdul-Jabbar, a sports icon, has a long history of advocacy for issues of social justice and his work in this realm beautifully reflected Northampton’s overall theme for the year, Diversity, Equity and Inclusion,” said Dr. Elizabeth Bugaighis, dean of academic affairs.

As part of his virtual visit to NCC, the most diverse college in the Lehigh Valley, he met with students at a pivotal moment in history: a pandemic, a time of racial reckoning, and a national climate related to tolerance and equality issues as volatile as it’s ever been. After speaking with students, Abdul-Jabbar appeared as the keynote speaker, a virtual event that was open to all.

“I felt like a kid again,” Dr. Robinson shared. “He was a childhood hero of mine. I have admired this man for years as an athlete, scholar and activist.”

Adbul-Jabbar emphasized to students the importance of being engaged and making a difference in their communities, an area in which he has always been a role model.

“I thought the event was great. I have to be honest; I did not know much about him but am now interested in learning more,” said student Rebecca O’Keefe.  “I liked the entire interview but especially liked how he talked about how important school is.”

When another student, Rebecca James, was selected to be the student speaker at the event, she was completely shocked. “I ran to my parents and told them the news. They were ecstatic for me. I did not know much about Kareem other than he is a famous basketball player. My parents started telling me about all the amazing things Kareem has done.”

After participating, James learned, “There is more to a person than meets the eye. I was surprised to learn he is a best-selling author and loves to ride horses. Yes, he’s an athlete, but he has done so many other extraordinary things and made many contributions to youth education. I hope it aspired the students watching to take a stand for diversity, equity, and inclusion.”

The keynote speech was more like a chat between friends, hosted by Dr. Gina Turner, professor of psychology.

“He was such a genuine and honest person. It was a real pleasure and I found myself completely engaged in our conversation,” Dr. Turner said.  “I was sad when it ended. I will always be grateful to have spoken to a living legend, who uses his celebrity and influence for good, and who continues to grow and stretch himself, as a writer, as the founder of his Skyhook Foundation, and as someone who is obviously still passionate about social justice.”

Abdul-Jabbar and Dr. Turner discussed his Skyhook Foundation, COVID-19 and how it has impacted people of color, his role in the movie Airplane!, his conversion to Islam, and his activism work.

As for what the audience took away from the conversation, Dr. Turner says, “I really hope they saw a person who cares deeply, and speaks the truth, and models how to have a rich and engaged life. He didn’t rest on his laurels after retiring from basketball – he’s continued to go on to do great things, following his own curiosity and drive.

“ I loved the end of our conversation the most, and I have to quote a friend and colleague who said: ‘I got teary-eyed toward the end when he addressed the importance of inclusion and being careful not to leave anyone out because it will hurt them.’ “

After the event, Abdul-Jabbar consented to an off-camera Q&A. Get the scoop on what was said behind the scenes!

Q: What role do professional athletes play in shaping the dialog on issues related to diversity, racial equality? Is their responsibility different because they are considered role models for many?

KAJ: When I started as an activist, much of our efforts were spent in getting people’s attention so we could explain the inequalities that they couldn’t see or were told didn’t exist. Today’s celebrities have the super power of being able to communicate with millions instantaneously through social media. That power is a responsibility because it can be used to reshape the country toward justice and equality, or it can be used to share selfies of their lunch. Non-celebrities have power, too: they can add their voices in protesting inequities and they cannot tolerate prejudice in those around them.

Q:  Shaquille O’Neal has taken a lot of heat for comments he made about current NBA players. He recently said in an interview, “When Kareem Abdul-Jabbar gave me constructive criticism, I took it, I listened and I brought my game to another level.” Do you think young people today are too sensitive? How do you give advice in a way that builds someone up rather than tears them down?

KAJ: It’s pretty common for young people who are suddenly thrust into the limelight and paid a lot of money for their athletic achievements to be a bit cocky. But most quickly realize that the skills that got them there won’t be enough to maintain a career unless they evolve to become better players. Criticism, no matter how constructive, can hurt. So, the best way to help is to make a person feel part of the team and that the entire team is doing things to improve. Also, focus on the specifics of what they can do to improve instead of what they’re doing wrong.

Q: While having one of the most distinguished of all-time NBA careers, you are quite the Renaissance man. In addition to being a star athlete, you are also a writer, columnist, historian, television and film producer and actor, a memorable turn as everyone’s favorite pilot Roger Murdock in Airplane. You even studied with Bruce Lee and starred in “Game of Death” alongside the martial arts legend. Did being a black male basketball player make it harder for people to take you seriously in other areas? What expectations did you have to defy to achieve your successes outside of the athletic realm?

KAJ: It was less about being black than it was about being an athlete. The stereotype of the meathead athlete who can only play sports has been tough to overcome. The “shut up and dribble” mentality is still with us. Every time a professional athlete gets in a car crash, hits their partner, gets a DUI, the entire profession takes a hit because it confirms public perceptions. But every year, as more and more athletes speak out and take a larger role in helping their communities, those perceptions change.

Q: Looking at your incredible journey, it’s hard to imagine that you’ve had to struggle. Yet you experienced racism in the NBA, a fire destroyed your home in 1983, heart bypass surgery, and diagnoses of leukemia and prostate cancer. Through it all you’ve come back stronger every time. Where do you find that strength and resilience?

KAJ: I’m lucky that I have such a strong support system in my friends, family, and fans. They give me the strength.

Q: In your opinion, is education the most basic of all social justice issues?

KAJ: No, health care is. In order to prosper as a group, people need to be healthy. They also need to know that they are valued by their society, which they can’t be if they receive inferior health care to others. Education is clearly also important because it provides the opportunity for the community to raise itself up economically.

Q: COVID-19 has put a spotlight on racial inequality in our country’s healthcare system. As part of WebMD’s social justice magazine series, you penned a piece titled “Black Lives Matter.” In it you said, “I’ve been fortunate because my celebrity has brought me enough financial security to receive excellent medical attention. No one wants an NBA legend dying on their watch. Imagine the Yelp reviews.” Is trust essential to building a more equitable healthcare system? What do you say to people of color who are reluctant to get the COVID-19 vaccine?

KAJ: I received my vaccine shot on camera and encouraged other black celebrities to do the same. While I understand the reluctance to trust the medical establishment, getting the vaccine is a matter of survival. You can’t change the world if you aren’t in it.

Q:  What are the most pressing two or three things that need to be addressed in the near future to advance the diversity agenda in our country?

Read more about Kareem Adbul-Jabbar at kareemabduljabbar.com and learn more about his Skyhook Foundation and how you can help at skyhookfoundation.org.