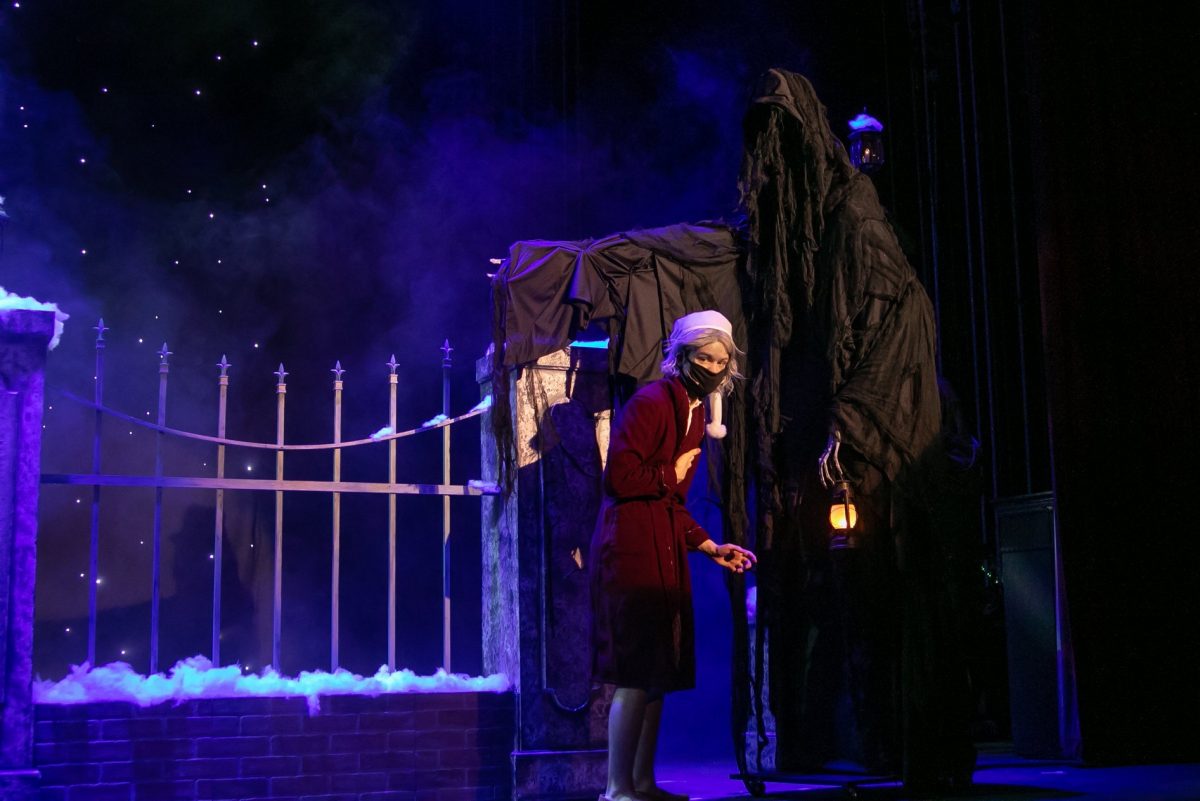 Who do you call when you need a giant ghost built for your theatre production? The best fabrication lab in the Lehigh Valley, of course!

Freedom High School’s staff member, Jodie Johnson, knew to reach out to the skilled technicians at Northampton Community College’s (NCC) Fab Lab for help bringing the Ghost of Christmas Future to life.  Johnson is the lead costume designer for the school’s theatre productions, the latest being the classic holiday tale A Christmas Carol.

The Fab Lab team sprang into action. They began by building the “skeleton” of the ghost out of PVC piping.

“After we designed the body structure, we attached it to a wooden board, which we cut and added casters underneath so the ghost could easily be wheeled around by a live actor on stage. Once that was done, we added chicken wire to the PVC piping to form the body shape,” said Director of the Fab Lab, Sean Brandle, who worked on the project alongside Bil Mitchel, Fab Lab technician.

“Working with Sean is wonderful. He is so creative and willing to go the extra mile. The piece worked out perfectly and was exactly what our director envisioned. The kids loved it, and the actor who moved the ghost on stage said it moved with ease. All the students were amazed. I look forward to working with the Fab Lab team in the future,” gushed Johnson.

When building the ghost, the idea was to have the arms mobile so a student could operate it from behind and push the ghost around on stage. Brandle and Mitchel drilled holes into the PVC and attached the arms to the shoulders using zip ties to create moveable joints. They attached long wooden dowels to the arms so the student could move the arms from behind the ghost. The finishing touches were the face, hands and lantern supplied by Johnson. The Fab Lab team attached the face and hands to the “skeleton” and added the black fabric and cheese cloth to dress the ghost.

After a little over a week of work, the Ghost of Christmas Future stood 9 feet tall!

“It was great to help create something special for a local high school. I wish I could have seen the students’ reactions when they first saw it!” said Brandle.

Getting this ghostly giant to Freedom High School was no easy task.  After carrying him through doorways and the Fowler Family Southside Center lobby, where people walking in and out of the building wanted photos with the ghost, he was loaded into the back of Fab Lab Instructor, Dennis Sutton’s pickup truck and driven to Freedom High School.

The on-stage production of a Christmas Carol will be available via on-demand streaming services starting December 11.  For more information or to order access to the production, visit their Facebook page https://www.facebook.com/FreedomHighSchoolTheatreCompany.

Learn more about NCC’s FabLab and how you can create your own projects here.