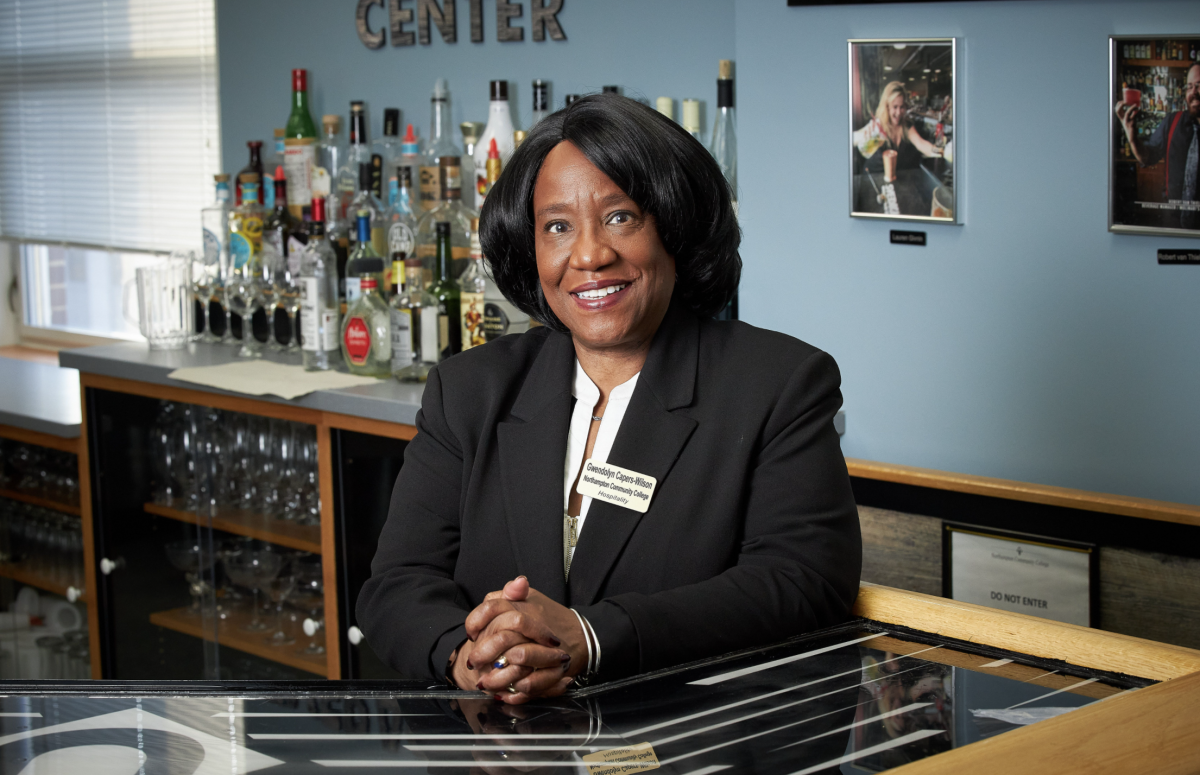 “Ready, Set, Cook!” was a smash hit on the Food Network, when Gwen Capers-Wilson, now an NCC hospitality professor, got the call she had dreamed of. She’d been accepted as a contestant on the popular cooking program and would be competing against another chef for bragging rights as a show champion.

As she stood in the bright lights of the studio kitchen set, with the audience cheering her on, she was handed the coveted French knife given to show’s victor! Despite the magic of the moment, Capers-Wilson couldn’t help thinking of her childhood growing up baking alongside her grandmother and cooking with her pop.

Capers-Wilson’s grandmother was the baker, making bread from scratch, and thinking about it today, she can still smell the yeast and sweet aroma.

“She’d teach me about double rising and the temperature of the water. It looked like rocket science to me, but I soaked it all in,” she said as she reminisced on those treasured family memories.

Her father taught her the art of mise en place, a French term meaning, everything in its place. “I would dice, chop and measure for my dad so that he had everything in place for his recipes.”

The art of being prepared would serve her well throughout her life. At age 15, Capers-Wilson started on a culinary path. In Nassau County, NY., she spent half of her day at Uniondale High School and half at a vocational school learning more than mise en place.

As she was getting closer to graduation, her instructors talked about the highly regarded Johnson and Wales University, and she considered their culinary program, which was new at the time.

Capers-Wilson followed her passion, and in 1977, she earned her associates degree in culinary arts from Johnson and Wales along with a dietetic technician degree. She started as a line cook for the Long island Marriott after college, and during her eight years there, she was able to advance to her first management position.

Cooking, cash handling and managing staff, Capers-Wilson went on to work for medical center cafeterias. Among her greatest challenges came from with working for Aramark, one of the largest food contractors in the United States. To comply with union regulations, Capers-Wilson was not allowed to cook alongside the team she managed, unlike with her previous roles.

She did it anyway.

“It wasn’t about following union rules. it was about taking care of my own.”

Concentrating on her people skills and passion for all things food, she earned a bachelor in food service management from her alma mater. “I wanted to continue to move up the ladder and couldn’t do that without my bachelor’s degree. The program taught me front of the house, back of the house, hotel and restaurant management, and it was a broader stroke for me to use my skills.”
After earning her degree, she had spent enough time on the front lines and wanted to pass on her knowledge from the industry. After teaching hospitality courses at Star Career Academy in Manhattan, a for-profit career technical school, she was hooked.

Then, tragedy struck. After a battle with cancer, Capers-Wilson’s husband passed away in 2015. Diagnosed on her birthday in January 2013, he was already at stage 4 lung cancer, which metastasized to his brain.

“It was a blessing that I got that much time with him,” says Capers-Wilson, who still wears her beautiful wedding set and, in this way, carries her husband with her everywhere she goes, reminded of his resiliency. “With minimal effects from chemo, the man persevered and worked up until the last few months of his life on earth. He always said, ‘Give 100 percent,’ and that’s what I do,” said Capers-Wilson.

Shortly after her husband’s death, she lost her father to a stroke in December 2016. But Capers-Wilson pushed onward even in times of loss. She pursued her MBA in hospitality management from Johnson and Wales online. “This gave me time to grieve and think about what I wanted.”

What she wanted was to continue teaching, but now, she had the option to teach at the college level. “I applied to colleges with great curriculums. I knew my talents could definitely go to use at NCC.”

She soon got a call from David Schweiger, director of the hospitality program at NCC, and after interviewing, she was offered the position as a hospitality professor on the Monroe campus.

Today, she is still putting her people skills, management skills and mise en place to work. “My favorite part about being a professor is that I can make the students laugh. We make learning fun and exciting. I also tell them the mistakes I made in the field to help them avoid some of these things,” she says of teaching at NCC.

Capers-Wilson regularly attends hospitality events with her students, like United Way and Monroe County events, and helps to come up with ways to get the students more involved. A talented writer as well as chef, she published an article in FoodSafety Magazine in December of 2018, How to Prevent Foodborne Illnesses from Occurring at your Organization.

The article outlined some research on the restaurant chain, Chipotle, and it took a deep dive into food handling, safe practices and where the chain was buying their food. “I aimed to teach outside the classroom and wanted to educate industry professionals as to why things unraveled the way they did in order to prevent that from happening in other establishments,” she said.

Capers-Wilson’s father taught her work ethic. If you need to be there at 6 a.m., you need to be there. She credits him for making her stalwart even when difficult circumstances hit, an attitude that came in handy when she noticed the obstacles her industry faced due to the COVID-19 pandemic.

From the outside, Capers-Wilson said it looks like the industry is sustainable – there are curbside to-go orders being placed, lower percentages of occupancy indoors appear to be combatted by outside dining, sanitization efforts are in place to provide safety and make people feel more secure. But, the landscape of the industry will have to change and adapt.

Students see the industry adapting, giving them the peace of mind needed to enroll in related classes. Capers-Wilson says enrollment in her classes has not been affected since the pandemic began, and from her experience, students are more eager than ever to learn.

“It was a transition for me to have to change from in-person to online last semester. Now that I have the hang of it, I’m set for success this semester.”

“COVID-19 will change the hospitality industry for hotels, cruises, resorts, restaurants, and more. Strategies have to change. ServSafe and hygiene training will have to be amped up,” Capers-Wilson said.

“For example, buffets have to change. Get rid of them altogether, or change the way their presented, with a gloved hand, behind plexiglass and manned instead of self-serve.

“It’s about instilling trust that we will keep you safe.”

And that’s something that Capers-Wilson has excelled in her whole career.