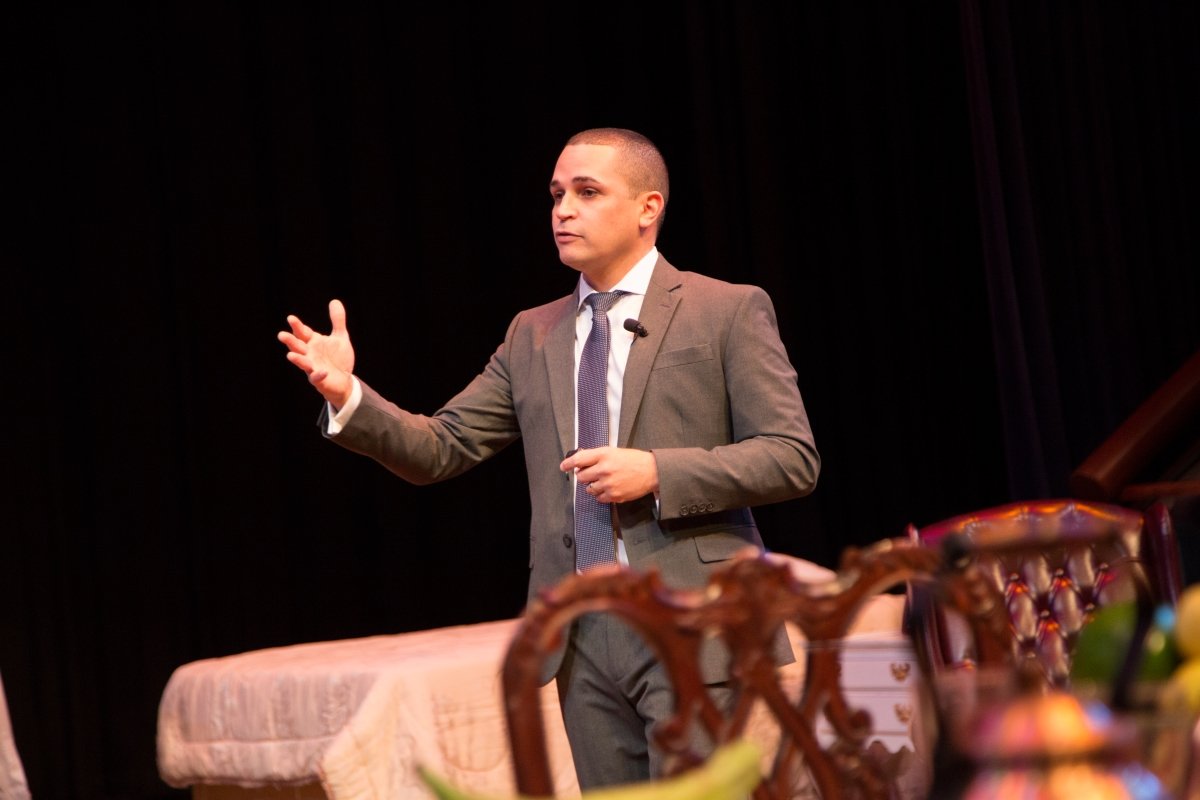 About a year ago, after seeing Dr. Javier Ávila’s one-man show The Trouble with My Name, the president of a prominent corporation invited him to give the keynote speech for the company’s diversity conference. The president enthused, “Javier, our employees are going to love you! You keep it real, but you make everyone feel great about the future of this country. You’re like the Will Smith of Latinos. That’s why I think you are the perfect Latino for this event!” Unknowingly, he had given Ávila the title for his new one-man show, The Perfect Latino.

“The title,” says Ávila, “has various meanings. It refers to the expectation some may have of the ideal minority: excellent, well-spoken, adaptable, compliant, assimilated, non-accented, impeccably dressed, well-mannered, perfectly groomed, and non-threatening. In that sense, the title is satirical.” He adds that it also refers to expectations in the Latino community that people may have of others in the same community.

Like his first one-man show, The Trouble with My Name, The Perfect Latino blends storytelling, comedy and poetry to shed light on diversity and inclusion, although the material is entirely new. After traveling and talking to people, Ávila recognized that he had the makings of a new show, with more revelations on representation, assimilation and cultural preservation. Ávila devotes countless hours to combine entertainment with education to make his presentations accessible, but complex; funny, but profound; and an inspiration to the audience to help make the world more inclusive, more equitable.

This perspective takes an attitude of openness. “Whenever people of different backgrounds get to know each other, misunderstandings are inevitable,” Ávila says. “They’re learning experiences, and they truly make us understand the meaning of empathy.” There are adaptations to different weather, food and the way people express themselves. He gives the example of a Puerto Rican who attends a Thanksgiving dinner on the mainland. Instead of dining on roast pork shoulder seasoned with adobo and rice with pigeon peas, he or she will be sitting down to turkey with a bread stuffing instead of turkey filled with ground beef and bacon or perhaps mashed plantains.

Ávila says that The Perfect Latino is effective because it approaches large and complex issues with specific examples of how to navigate between cultures. “It works because it doesn’t skip the fundamental step of validating each person’s reality. Only then can we take the next step. That’s when we have a shot of moving forward together.” Ávila invites his audience to laugh and cry with him, to feel the way he feels, and to connect profoundly.

The poet, novelist, author, professor, and performer reflects on the current hot-spot issue of divisiveness. “Even though there’s divisiveness,” he says, “I truly believe we’re at a crossroads, and some barriers are coming down, but it’s up to us to do what we need to do: listen to each other; we really aren’t that different. Acknowledging diversity as a good thing is a crucial step toward inclusion.” Ávila sees hope especially in children and young people and notes that many of them have already taken the steps adults need to take. He observes that people who are now in the majority fear being treated as a minority when they, in fact, become such. That, he says, is not the way minorities feel. “For example, the goal is to be treated with fairness, not to take revenge on others. The goal is to be given the same opportunities, not to have preferential treatment.”

Ávila has already performed The Perfect Latino at a few universities, and his team is planning a national tour. In the meantime, The Trouble with My Name has become a phenomenon and is still being presented, with nearly 200 performances in 32 states and Puerto Rico since 2016.

Encouraged by his parents, Ávila has been writing and performing poetry since the age of seven. He earned a master’s degree from the University of Puerto Rico and a PhD from Indiana University of Pennsylvania. Born and raised in Puerto Rico, he is completely bilingual in Spanish and English. He is the recipient of numerous awards, including Pennsylvania Professor of the Year and most recently the 2021 William Aguilar Cultural Award given by the American Association of Hispanics in Higher Education.

Ávila is the author of thriller novels, one of which, Different, was made into a movie, as well as poetry volumes.

He has been teaching at Northampton Community College for about fifteen years. He is so beloved by his students that they call themselves “Avilites.”

Further information on presentations of The Perfect Latino will be forthcoming.