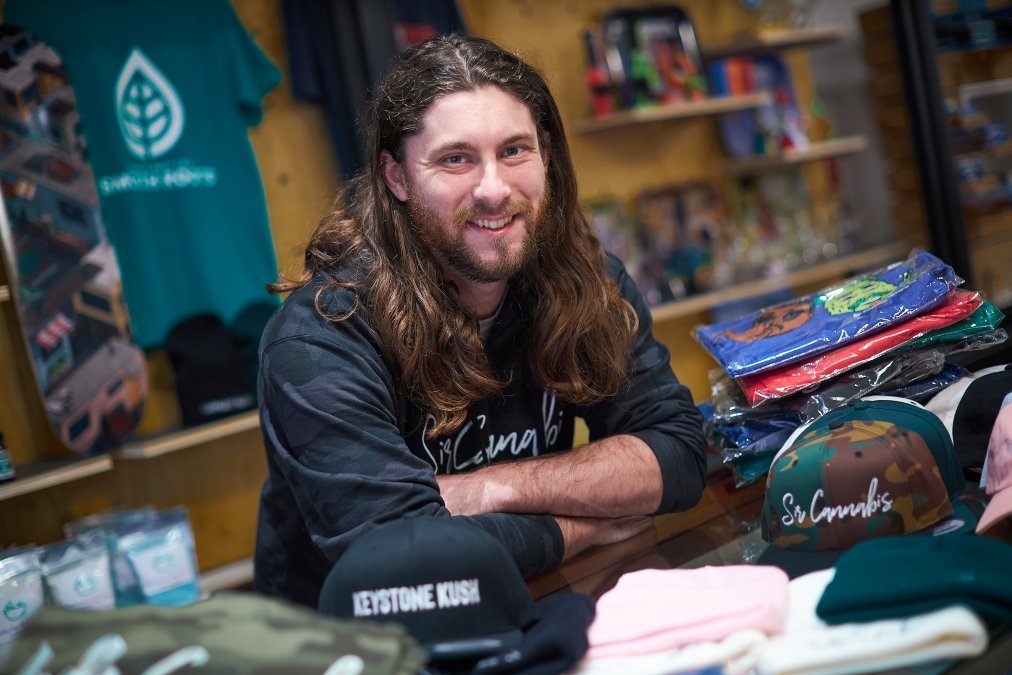 Life can throw you curveballs, but it’s how you hit them that makes all the difference.

Chris Voag ’14 was a business administration major at Northampton Community College with big plans for a future that included earning his bachelor’s degree at Temple University. That’s when he received what would be a shattering, life-altering diagnosis for anyone, but especially for someone only 19 years old: he had Stage 1 testicular cancer.

Doctors recommended surgery followed by a month of intense chemotherapy with platinum-based drugs which, while highly effective, can cause up to 40 specific side effects, not the least of which is debilitating nausea. To mitigate the symptoms, Voag turned to cannabis — the medicinal name for the plant widely known as marijuana.

“When you get that diagnosis, you think you’re going to die,” reflected the Bethlehem native. “But using cannabis as a treatment helped me with the anxiety of that, and I was able to get through chemo with no nausea or vomiting.

“Cannabis gave me energy, it helped me sleep. I thought I was really going to suffer, and I didn’t.”

He was back to NCC within weeks.

A few years later, Voag was finishing up his degree in business administration and management at Temple University when life threw him another curveball — this time in the form of a Stage 4 oral cancer diagnosis for his father. It was tea made with cannabis that helped Voag’s dad speak and soothe his throat during 35 radiation treatments and nearly three months of chemo.

The family also believes Rick Simpson Oil (RSO), a concentrated form of cannabis oil, may have helped cure the elder Voag and spare him some pretty grim surgery.

“Nothing is a sure thing,” Voag stresses. “Yet his tumors appeared to be shrinking faster than they were expected to — his doctor said he’d never seen anyone get through stage 4 oral cancer like my dad did. He is cancer free to this day.”

It was a professor and mentor at Temple who suggested that Voag’s championing of medical cannabis might be the centerpiece of a brand. Thus, the idea for “Sir Cannabis” was born, and Voag hit that curveball of misfortune right out of the park and into an entrepreneurial venture — and a mission.

Enlisting the graphic design skills of his good friend, fellow Temple student Bill Mahoney, Voag created a cannabis-bud character dressed rather formally in a suit “to bring more class to cannabis, to help remove the stigma. People who use cannabis have a bad image — that they’re stoners who live with their parents, that they’re slow or not educated,” he says. “It’s just not true.”

The Sir Cannabis brand includes apparel and herbal grinders, and has expanded to include a character known as “Lady Cannabis” on women’s apparel. Sometimes Sir and Lady Cannabis are depicted snowboarding or skiing “to show that cannabis users have active lifestyles.” The brand is sold primarily online and at CBD oil stores throughout the Lehigh Valley.

Voag has also taken the message about the wonders of medical cannabis to social media via a series he calls “Cannabis Warriors.” His Facebook and Instagram posts feature the stories of cancer patients who have a better quality of life thanks to their use of the plant.  “From autism to cancer, we share individuals who have gained a better quality of life because of this amazing plant,” he says of the series.

Cannabis for medical use was legalized in Pennsylvania in 2016, and is approved for 21 qualifying conditions. Patients buy it at state-run dispensaries, which have received an uptick in customers since COVID-19.

Voag says, “Cannabis was deemed essential [during pandemic lockdown] which removed some of the stigma and made people more likely to try it as a medicine for conditions like anxiety. It’s a more natural remedy.”

Voag’s Sir Cannabis clothing line also benefited from more people being home and shopping online during the quarantine. “The first few months I didn’t sell any clothing — I didn’t want to put anyone in danger. But when I started up again, we’ve been doing even better than before,” he says.

Long term, when cannabis is fully legalized, Voag hopes to open up his own clothing shop. In the short term, he’s evangelizing about the plant that helped him and so many others have a better quality of life, through speaking engagements, features on Cannabis Talk 1010 radio out of Los Angeles, Philly Voice, WFMZ, Morning Call, and through a collaboration with comedian George Lopez.

Voag also hopes medical cannabis will soon be made legal in all 50 states. “We’ve moved forward, but we’re not where we should be. Until it’s legal at the federal level, they won’t do the research to show that it shrinks tumors and can cure cancer,” he says.