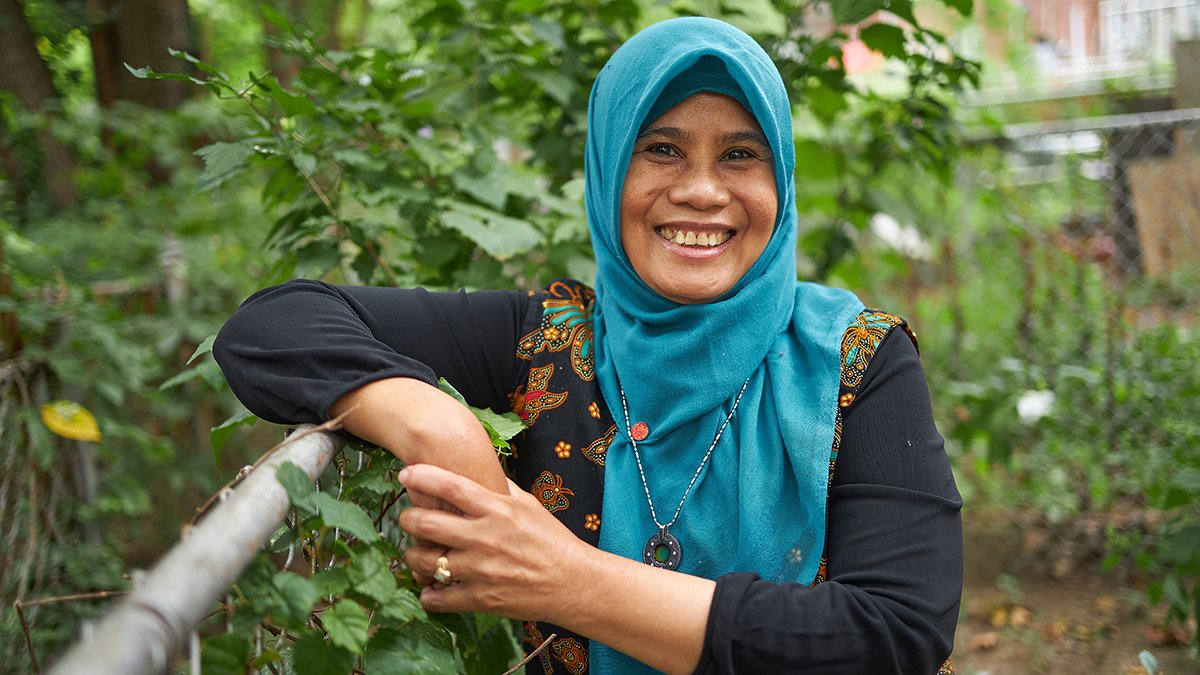 Adjusting to life in the United States isn’t easy when home still feels like thousands of miles away.

For Zurnita Madjidji living in “the box” felt crowded and foreign.

She shared it with her two children and now ex-husband. When he left for work, Madjidji was left to care for her young daughters, isolated. While everything around the box flowed with activity like a beehive, she felt alone in the crowd.

The box, as she called it, was her home, a one-bedroom apartment. The beehive was none other than New York City, Queens to be specific.

“When I came home, the loneliness came back,” she said.

Madjidji, originally from Medan, Indonesia, immigrated to the United States in December 1989. When her ex-husband asked her for her hand in marriage, she had a question for him: If she came with him to the U.S., would he allow her to attend college? He agreed.

It was on that promise that she followed him across the world and where her immigration story of building community, finding herself and breaking out of her box began.

New connections didn’t come easy to Madjidji. Her only link to home came from a few friendships she was able to cultivate from women in New York City’s Indonesian consulate.

Soon, Madjidji outgrew the apartment and pleaded with her then-husband to find another place to live. He assented and she soon found herself in December 1991 moving to the Poconos in Pennsylvania. It was a stark contrast to New York City, with fresh air and rolling tree-dotted hills.

“But there was a loneliness I received there too,” Madjidji said of her new home.

Looking around, she quickly realized that none of her neighbors looked like her. Her friends from the consulate remained in the city. Madjidji’s crowded box had widened, but that only made her personal void more noticeable.

Then, a lifeline. While visiting the library, Madjidji found an advertisement for an English as a Second Language class at Northampton Community College. She enrolled and gained more than she set out for. She developed relationships with her classmates, shared immigration stories and even employed her new skillset to get to know her new neighbors.

Madjidji was placed into ESL II and within a month advanced to ESL III, attending classes twice a week, during the day. She continually practiced reading, writing and speaking.

In the fall of 1997, and with the encouragement of her instructors, Madjidji enrolled as a general studies student at Northampton. Admissions staff assisted her with the completion of her paperwork and FAFSA.

The classes in college became more intense, especially as a non-traditional student, Madjidji said. But this didn’t deter her. She participated in group study sessions with other students similar to her.

Madjidji, however, was confident in certain subjects and became a peer tutor in algebra and beginner Spanish. In subjects like U.S. History, which some of her classmates had studied since grade school, she received tutoring from her peers.

One of her favorite parts at Northampton was that she felt like she belonged, she said. Her professors were invested in her and many of the students knew each other by name. Many of her professors allowed her to bring her kids to class, when she didn’t have childcare, and have them wait outside.

“When I had my graduation ceremony I felt like I was on top of the world.”

“When I had my graduation ceremony I felt like I was on top of the world,” Madjidji said about earning her associate’s degree in 2001.

Madjidji went on to complete a bachelor’s degree in sociology at East Stroudsburg University in 2004. She had accomplished her motivation for coming to the U.S.

Her new degree gave her a view over the top of the box, but she was unsure of what she needed to get over the edge.

“You’re never good enough for what you do,” Madjidji said of her attitude during those years.

She first worked for Northampton Community College, starting in 2004, in the Continuing Education department, part-time as a secretary, until 2007. It was during that time she began experiencing problems in her marriage, that ultimately led to her divorce.

Madjidji left to work for a check-cashing company as a manager. This provided full-time hours and benefits. She assisted customers and kept the company’s ledger for about two years. After, it led to a six-year-stint as a support professional for people with disabilities.

By now, her children were reaching college-age and eager to leave the nest. Both graduated and made their way back to New York City for work and a new start.

While it left Madjidji alone, she was pleased. She thought back about the times she nagged them to do well in school or when she was involved with school activities. She remembered her car, emblazoned with the bumper sticker, “Proud Parent to Have an Honors Student.”

“I taught them the value of life, and then of education,” Madjidji said. “And also, to respect their neighbor.”

She considered following her children back to New York City, but instead took a job at a company called Quality Progressions as a supports coordinator

While working at the disabilities company, Madjidji volunteered in South Philadelphia for Dompet Dhuafa, an Indonesian humanitarian and education non-profit. She assisted with fundraising for natural disaster relief, taught beginner ESL and taught religious studies to children.

It was the first time she had the opportunity to help other immigrants reach their goals, and she enjoyed that thoroughly. It was also when she realized she wasn’t the only one who felt stuck in a box and she learned more each day about how to break free of it, helping others with their experiences in the process.

After volunteering for four years at Dompet Dhuafa, the organization experienced a leadership change and Madjidji was called upon to become the next executive director. She was one of the organization’s most dedicated volunteers.

She served for eight months but resigned, not interested in the politics that came with the position.

That’s when she began taking courses with the Welcoming Center for New Pennsylvanians’ Immigrant Leadership Institute.

The students, all immigrants, are given the chance to participate in classes, workshops and trainings to build confidence and leadership skills. They can also design their own team projects.

Madjidji and her teammates planned and hosted a forum called N-ever Alone: Immigrants, Social Isolation and the Slippery Role of Social Media, discussing the effects social networking has on immigrants.

“I had the experience of feeling isolation as an immigrant, and so my team and I thought maybe we can help people overcome these barriers.”

“One way or another, we might feel isolation,” she said. “I had the experience of feeling isolation as an immigrant, and so my team and I thought maybe we can help people overcome these barriers.”

“Be vigilant, be active, don’t just sit in the house,” Madjidji said as advice to new immigrants. “… ask people, go to the library and find some information for immigrants that can help you.”

When the COVID-19 pandemic struck, Madjidji found herself quickly out of a job. Then, serious government regulations forced her to stay at home. For someone familiar with social isolation, social distancing was an unwelcome surprise.

She’s kept busy by gardening and crocheting and helping others when she can. After harvesting from her garden, she shared some of the fruits and vegetables with her neighbors.

Recently, Madjidji raised money for charity by making masks. When the pandemic was hitting New York City the hardest, she asked others to donate to a charity in the city, and when they showed her the receipt, she made them a mask.

“I like to socialize,” she said. “I like to get involved directly with people. With COVID-19, I have to stay home. It’s kind of lonely, a little, but I try to find a way to overcome that.”

She’s been attending events online through the Welcoming Center but said it’s not quite the same as their in-person programming. The one positive: its brought her family together. Her daughter, who hasn’t been home for this long in a while, is good to have back, Madjidji said.

Madjidji wants to write a book, chronicling her childhood in Indonesia and her struggles being married in a foreign country and raising children, she said. Tell the story of what life felt like living in a box.

“If you make a mistake, you are not your mistake.”

“If you make a mistake, you are not your mistake,” Madjidji said. “You can fall and get up and dust yourself and walk again. I know so many people who fall and then they think they cannot do anything. They are hurt so badly and then they begin to believe what people tell about them, what people will say about them.”

Building a Bridge Between Industry and Education

And The Winner Is…